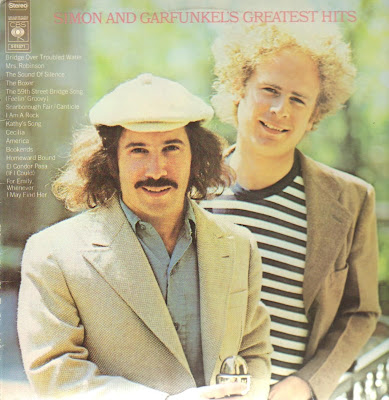 I was up about 3:30 AM with a sick stomach so I slept an extra hour to make up for lost sleep.

I gota  strange letter with the wrong address. I didn't open it but I don't think it's mine so I'll give it back to the mailman tomorrow.

Also tomorrow, Sutherland and Gould will be on PHIL DONAHUE.

I looked at my Linda scrapbook several times today and I got lost in my Simon & Garfunkel records several times.

No time to work on my story again.

I'm going to ask Mom to pick up SEVENTEEN for me on Saturday along with the new SPEC if it's out.

NOTES: No recollection of the letter incident so I have nothing to report there I'm afraid.


I had gotten my first S&G album---their Greatest Hits collection--about three years earlier, followed quickly by BRIDGE OVER TROUBLED WATER, their final original album before their initial break-up. They remain favorites to this day. Wanted badly to see them a few years back here in town but the CHEAP seats were $150.00!! Screw that.


SPEC was a companion mag to SIXTEEN which itself was essentially a movie, TV and music mag for teen girls. Lots of boys I knew bought it, too, though, myself included, as it covered shows like DARK SHADOWS, THE PARTRIDGE FAMILY and other shows enjoyed by both genders. SPEC was created so that in essence SIXTEEN could come out twice a month. There was no real difference.


OOPS. Apparently I had my timeline wrong regarding Gould and Sutherland on Phil's show.
Posted by Booksteve at 12:30 AM