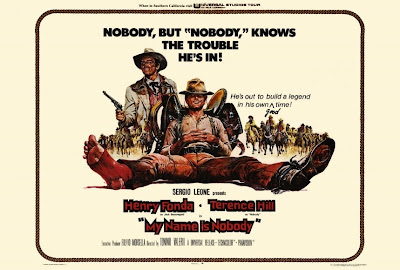 Had to help George again as soon as I got up this morning. He paid me fifty cents.

Mom bought me the mag with a lot of the most beautiful pics of Linda I have ever seen!

Later, Mom got a call from her niece, Phyllis.

We all went over to the Skywalk to see Henry Fonda and Terence HIll in MY NAME IS NOBODY. It was hilarious!

On the way back, i picked up an X-MEN book I had missed a few weeks back.

I did NOT go to see EXORCIST today but there's still hope! Today's paper very explicitly clarified that under 18 COULD get in with a parent! Maybe this week.

I had pains in my chest this evening so I exercised some. Need to start doing it more.

Tonight, Mom and I stayed up until 11:45 to see SWEET CHARITY.

NOTES: SWEET CHARITY is the Shirley MacLaine musical which apparently ran long on the network.


Phyllis, as stated, was my mother's niece. Her sister Mickey's girl. To hear my mother tell it, she practically raised Phyllis herself as her Mom was...not always around.


I knew Terence Hill from the two Trinity spaghetti western comedies. Terry and I had seen them in theaters a few years earlier. Henry Fonda was one of my Dad's favorite actors so we all went to see MY NAME IS NOBODY which was and is not just a funny picture but a good, atypical western and an excellent example of the Italian Western. With the rise of the Web, I've been able to see scores more of them since '74 and NOBODY remains a favorite. Fonda still had an Oscar win ahead of him in the eighties. Hill enjoyed much success in the international market with and without sometime partner Bud Spencer and, in the nineties, starred as LUCKY LUKE in a US-shot , european-distributed TV series based on the classic French comic book cowboy.