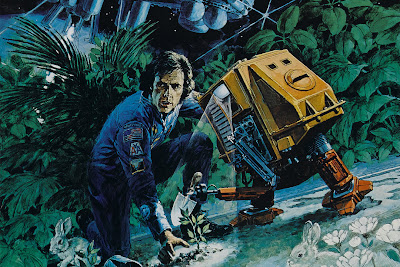 I got up to see I DREAM OF JEANNIE at 6:30AM like I also did on Tues and Thurs. There was a bad storm just after Mom left for work.

Doug called about school this evening.

I wrote a short story with 200 more titles in it! It was fun and I hope to do more like that.

Somebody took 2 of the 3 cans I put out last night and now today we're out of bags. I broke my work record though. Previously 35 minutes, it's now 27!

NOTES: SILENT RUNNING was a not quite successful attempt at a serious sci-fi movie saved by a partly solo performance by the great Bruce Dern.


I DREAM OF JEANNIE was, of course, the classic sixties sitcom with Barbara Eden and Larry Hagman. I'm definitely more a BEWITCHED guy myself but I've had my Jeannie periods, too!