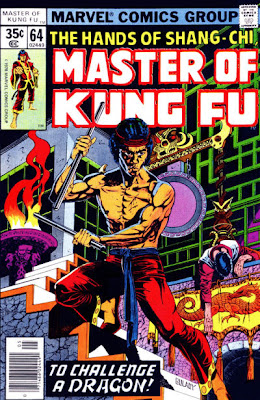 I was very, very tired this morning. I drifted off into dreamland off and on for most of an hour after Mom left.

When Terry got off work, I went with him over the river. I got all the new mags plus an issue of FF I needed. Got a kung-fu mag plus a mag with a (bad) parody of my current favorite flick.

This morning I read through my Shang-Chi collection.

Later i learned that ABC was rerunning WONDER WOMAN and the previously-cut-off-by-dumb-old-channel-12 MEN OF THE DRAGON as a double feature. I hope they don't cut it off again!

Speaking of channel 12, I got channel 12 on the radio! Weird! I managed to hear HOGAN'S HEROES while I was at work tonight!

Terry bought my "men." All of 'em! For three bucks and five or six comics which I don't get 'til tomorrow anyway. Og, well. I didn't want 'em anymore anyway.

NOTES: My "men" would have been my action figures--Captain Action, Mike Hazard, Johnny West and the like. Comics I didn't outgrow but those I did. We had spent large parts of the preceding six years carting our "men" between houses and playing with them. As I understand it, Terry still has them in 2012!


MEN OF THE DRAGON was a made for TV martial arts movie that I don't really recall anymore at all.


Shang-Chi, on the other hand, was the star of the single best-written Marvel comic from around this point 'til pretty much the end of the decade. Started out by Steve Englehart but Doug Moench made the book his own. I went on a radio talk show around 1980 and they asked me who I thought the best writer in comics was and I answered without hesitation, "Doug Moench." He's now a FB friend.


Shang-Chi seems doubtful to be reprinted in its entirety as the character was the son of Fu Manchu, not only a licensed property to which Marvel no longer has any rights to but now a controversial example of political incorrectness toward Asians. Too bad. It really was great stuff when Moench made it essentially a James Bond martial arts epic movie on paper with the help of artists like Paul Gulacy, Mike Zeck and Gene Day.
Posted by Booksteve at 12:30 AM

I still have my Johnny West.