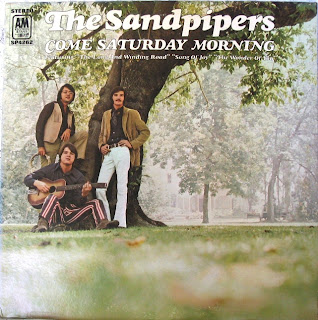 New books weren't supposed to be out today but they were. Including SPIDEY & THE ELECTRIC COMPANY. I got one book with lots of stuff on Lovely Linda! Also I finally got that Donny and Marie album and the song COME SATURDAY MORNING. Hadn't heard that in years until yesterday. It was one of the ones Debbie and I had heard on the radio the night we babysat for her friend's baby. Oh, how this one reminds me of her.

I may go see a double feature tomorrow with Terry. Probably not, though.

Doug came up and I helped him try to start a scrapbook like mine. He stayed 'til after 10 but we didn't get too much done. Maybe he'll come back.

I saw an episode of STAR TREK that I had never seen before.

I got a new Wonder Bread card--Clark Kent.

NOTES: Seems so odd to see how COME SATURDAY MORNING reminds me of Debbie here. Not only doesn't it do so anymore but I can;t recall that it ever did. At this point, I knew it only from AM radio. A couple of years later, I would finally catch THE STERILE CUCKOO, the movie that it comes from. It's still a lovely song.


As long as Doug and I had been friends, another thing he simply never did was come over to the house. Nor did I go to his except during the school year when I'd walk the extra block past the school to his house and then walk back to the school with him. Seeing as how we really only lived about 4 1/2 blocks apart, that just seems strange to me now.
Posted by Booksteve at 12:30 AM

You inspired me to look up "Come Saturday Morning" on iTunes -- and it's not there, at least not the version by the Sandpipers. Surprising! I used to love that song.