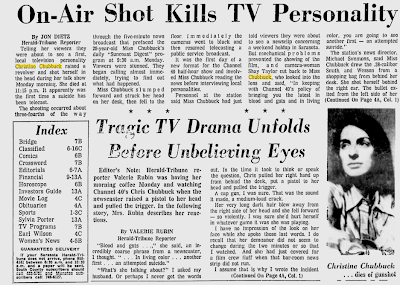 A very cool day. Well, not a VERY cool day but pretty cool.

I stirred up old memories on a trip I took from King Kwik to Horn's to Scroggins to Woolworth's. I walked up Bakewell past the house where we lived more than ten years ago now. It's still there and not very different. Didn't buy many books at any of the stops but the nostalgia was fun.

On the way, I also mailed Linda's letter. Hopefully that will provoke future memories.

Tried to work on my story but just couldn't get into it, not even to Simon and Garfunkel.  Oh, well.

When we went in to work, there were two people in there as well as two dogs tied up and waiting outside. I did about half my work, then asked Mom to do the other half after hers. Then I left so I didn't disturb them. Too bad really as I'm sure I would've beaten my 35 minute record.

I've decided definitely what I'm saving up for. To meet Linda. I asked her where in my letter and if she answers I can afford to go almost anywhere. If that doesn't work out, I may have to use it for school. Boy!

Mom told me this morning and, since, I've seen it on TV and in the papers. A Florida newswoman referred to the "blood and guts policy" of her TV station and then announced an "attempted suicide."She then pulled a gun from her handbag and aimed it at her head and fired. ON THE AIR! She died later. Apparently she was expecting only to critically wound herself but not fatally. The whole thing including a report of the incident was in the script she had written earlier.  Wow. What will happen next?

Saw a good TV movie starring Carrie Snodgress and another with a title I couldn't resist--LINDA.

I blew kisses at my Linda poster at least 50 times today. Now I know I'm crazy...about her!

NOTES: What is it about teenagers that so many are fascinated by suicide even if they'd never actually so it tehmselves. I know I was. This story really hit me. If I knew the story in more depth, I'd long since forgotten but I looked it up online. There's a long and detailed Wikipedia page on the reporter, one Christine Chubbuck, and seen here is a clipping from that time.


As far as wanting to travel to meet Linda, I have a hard time remembering a time when I actually HAD a savings, let enough one that could take me almost anywhere. But I did. As much as I was spending on comic books and movies, remember that they were all less expensive back then. I was getting money for working and still getting a sort of allowance, too, and I managed to save quite a bit. Held onto it until I bought my first VCR in 1980. Haven't really been able to save anything since, darn it!

The Snodgrass movie was "Impatient Heart" (1971)

"Linda" was a repeat of a TV movie from 1973 with Stella Stevens and Ed Nelson.