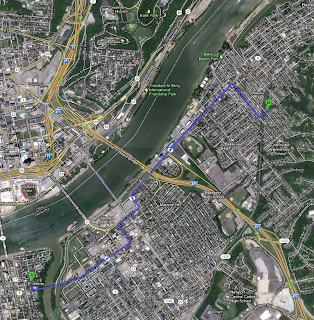 I found out that AIRPORT 1975 is scheduled for October 18th opening at the Valley. EARTHQUAKE will be at the Carousel and THE MAN WITH THE GOLDEN GUN at the Times at Christmas! 100 new screens are to be put up around the area in the next 3 years including 6 at Erlanger!

I went with Terry to see 99 AND 44/100 PERCENT DEAD and M*A*S*H together. It was great. I had already seen the latter. I gave him another model and he gave me my remaining comics although it turned out I already had three of them.

Over at his house, he's got a great Raquel Welch poster on his wall. I also snuck a peek at his dad's PENTHOUSE. Wasn't much really but a good bargain with about 200 pages for $1.25. I pay that much for only 75 pages in some I buy! Boy!

I missed the stupid bus and had to walk. I crossed the road to the unopened new bridge and found 4th Street. When I came within sight of the 4th street bridge, though, my chest hurt so I caught another bus there at the stoplight to take me across. I'm glad I did.

That mag had at least 50 pics of naked women--completely naked! But I truthfully feel I'd rather see pics of Linda fully clothed than any 100 naked women. Linda is lovely in every possible way. Wow!


As far as PENTHOUSE, you'll note that I was impressed by the 200 or so pages and yet only 50 or so pics of naked women.


Somewhere I have a photo of Terry's Raquel poster, literally snapped with my camera on one of these visits.


At the time, he was living in Bellevue, KY. I was in Covington. You can see by the blue line how far that walk was. I started walking from Terry's house (B). I caught a bus in Newport just before the bridge to Covington, then got off just on the other side of the bridge and was half a block from home. Luckily bus fare was only a quarter back then.
Posted by Booksteve at 12:30 AM