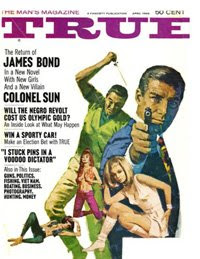 This morning they played hits that I was crazy about for a full half hour on the radio!

Terry came over and we went to OBS about 11:15. They were supposed to get new old books in but by 3 nothing had shown up. I got 3 oldies anyway, a TV GUIDE and a mag with Raquel Welch pics. Also, two old issues of TRUE with a condensed version of 007's rare COLONEL SUN! Terry bought quite a few old mags with Raquel including a PLAYBOY. He also got a card from an odd man about  UFO's.

We ran into one of the guys from the S.T.A.R. thing last Saturday, too.

Terry gave me a dollar for my Raquel mag I got for a quarter and another dollar for the MAGIC CHRISTIAN soundtrack LP. For once I came out on top in a deal. He also gave $3.50 for INFINITY 5 and I gave him a Raquel picture and a BARBARELLA poster to get me the PLAYBOY issue with 007 in LIVE & LET DIE. If he can't, he owes me another dollar.  If I get the PLAYBOY I promise myself I'll control myself so I won't have to tear it up.

Terry bought both Marie Osmond albums and the BAND ON THE RUN album. I can't figure how he can afford it all.

If Doug's back tomorrow, we're going to Newport to catch THE THREE MUSKETEERS. It's also at the International '70 in Cincinnati.

The first new series commercial I saw on CBS just had to be PLANET OF THE APES with Roddy. And it was!

NOTES: First of all, I don't recall ever having a BARBARELLA poster. Considering the weird stuff that I remember like it was yesterday, it still freaks me out when I totally blank on something. INFINITY 5 was a fanzine which came with a free Berni Wrightson poster. I still have the poster. I found it just recently and wondered what I had done with the book, itself. Now I now.


Both Terry and I were enamored of Marie Osmond, a year younger than him and only 8 months different than myself. I didn't care for her "little bit country" style of music but ended up with her albums eventually.


THE MAGIC CHRISTIAN is a 1969 psychedelic mess of a movie that neither of us had seen but Raquel was in it with a whip. I had bought the soundtrack in the cut out bin somewhere for a buck and here sold it to him for the same. Eventually, after he cut out the picture of Raquel from the back of the LP sleeve, he traded it back to me...and I still have it today. Great music from Badfinger and Thunderclap Newman. Some silly comedy bits with Peter Sellers and others.


Somewhere around here. Terry and I had (or soon would) bought all of the 007 paperbacks for 10 cents each at Horn's, the junk store here. COLONEL SUN was a later, post-Fleming sequel by the esteemed Kingsley Amis. I hadn't found a copy of the book but I did find on this date the two issues of TRUE where it had been excerpted.