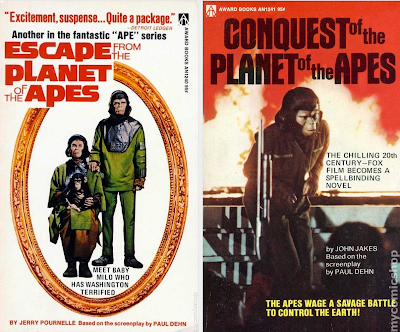 I helped Mrs. Pritchett in the basement this morning and I got to fool with a real Japanese Samurai sword that used to belong to George.

At Woolworth's, I bought novels of ESCAPE and CONQUEST.

Doug and I saw THREE MUSKETEERS. It was just a little disappointing in spots but had some truly great moments!

Doug gave me a page out of the STAR on comics.

We caught the first bus back but turned out we were on the wrong one. We were headed toward Cold Springs! Luckily for us, the bus broke down and started smoking so we all had to get off and wait for another bus. He and I got on one going the right direction and rode it all the way back home.

I watched the first episode of THE HUDSON BROTHERS.

NOTES: THE THREE MUSKETEERS was, of course, the Richard Lester version. It's aged well and seems even better now than it did then...and so does it's part two sequel, filmed simultaneously but released the following year.


Eventually I had all the PLANET OF THE APES novels. The first one, the original by Pierre Boulle, is, of course, nothing whatsoever like the movie. Almost wish they had released a novelized version of the movie, too.


The Hudson Brothers were the next big thing, three talented siblings who were being compared favorably to both the Beatles and the Marx Brothers. I loved their nighttime series, their records and their later Saturday morning show. Somehow they never made it though. Bill ended up with Goldie Hawn for awhile however, and is the father of Kate Hudson. Mark became an award-winning music producer known for his rainbow-dyed beard. Not sure what happened to Brett.


The Samurai sword was cool!
Posted by Booksteve at 12:30 AM

I really dug the Hudson Brothers, too. Hey, Mar-go-lis!!

Of course, it was a show for a while.

One of them married Cindy Williams as I recall

Yep. That was Bill, after Goldie.