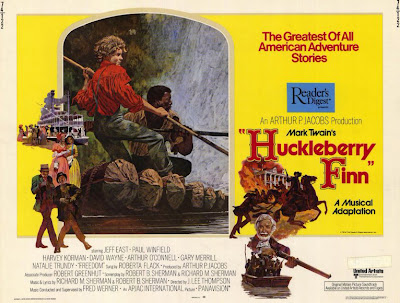 I saw a special on the filming of HUCK FINN with Apes director J. Lee Thompson. I saw a commercial for the new SHAZAM show, too. I also watched MR. HORATIO KNIBBLES, THE SAINT, etc.

Mom got me Cokes for a change. I haven't been drinking many so I guess it's okay. Anyway, I asked for 'em.

Terry called. Said he'd got me the one PLAYBOY book along with others for himself. I wasn't gonna call him today because my horoscope almost begged me not to. He wants me to come over to help him with another scrapbook tomorrow and then go to Scroggins Monday.

I finished CONQUEST and decided to read just the beginning and the end of BATTLE so I did just that.

Notes: The version of HUCKLEBERRY FINN mentioned above was the then-new musical feature starring Jeff East, perhaps best known today as the hunky teenage Clark Kent in 1978's SUPERMAN. Director Thompson had just helmed BATTLE FOR THE PLANET OF THE APES. Like that film, this, too, was produced by Arthur P. Jacobs. Jacobs wife, Natalie Trundy, who had appeared in all (I believe) of the Apes films in various roles, was also in the film. Jacobs died while it was in production.


MR. HORATIO KNIBBLES is a British children's film that has in the years since taken on a bit of a cult status. Sort of a variation on HARVEY with a giant rabbit that only a little girl can see.


I wrote about the SHAZAM show recently on both BOOKSTEVE'S LIBRARY and THE BOOKSTEVE CHANNEL. It really wasn't very well done.