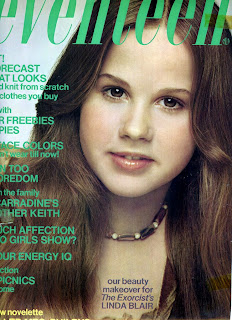 E-Day! THE EXORCIST finally started uptown. Terry's mother says now she wants to read the book before she'll take us, though. SO CLOSE! I hope we can go Saturday. I read the screenplay today. In Cincinnati, I got the new SIXTEEN with some stuff on Linda. It says she gets more fan mail than she can answer. I hope she answers MY letter!

I also got CRAZY with two spoofs of THE EXORCIST.

I saw another magazine, SEVENTEEN, with a gorgeous pic of Linda!

Didn't get to work on my story today because I went to see S*P*Y*S. It was good but I don't see it making my Top Ten.

I helped George this morning and Mrs. Pritchett tonight.

According to TV GUIDE, dumb ol' Channel 12 has cut off MIKE DOUGLAS! Starting next week!

Terry says he actually did go back to Showcase yesterday!

NOTES: S*P*Y*S was a so-so movie reteaming Elliot Gould and Donald Sutherland for the first time since 1970's M*A*S*H. The pair had appeared on DONAHUE plugging it and that convinced me to see it. That hour with them being their eccentric selves was funnier than the film.


The picture of Linda on SEVENTEEN was the best I ever saw.