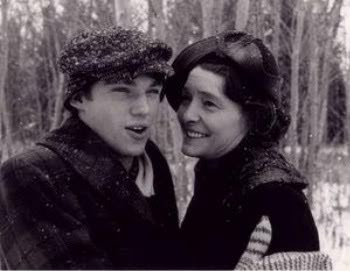 I woke up today with the beginnings of a cold that got worse all morning.

I saw Lena Zavaroni on WONDERAMA. I'm really beginning to like her singing.

We all went Christmas shopping over the river. I stayed with Mom and Dad for awhile but then split off to go to Bell Block where I picked up VARIETY and that YOUNG FRANKENSTEIN book. At Walgreens I got more APES cards and two more paperbacks, THE TRIAL OF BILLY JACK and CLINT EASTWOOD. I read CLINT EASTWOOD this afternoon.

Watched three Christmas specials on TV including THE HOMECOMING. THE HOMECOMING and John-Boy Walton were what originally inspired me to keep this journalistic record!

NOTES: I had totally forgotten that! John-Boy Walton wanted to be a writer and often was seen writing in his journal about his daily life. THE HOMECOMING, subtitled A CHRISTMAS STORY, had originally aired in 1971. Although not my usual type of fare at age 12, between the snow scenes, the impressive acting, the rare dramatic turn of Edgar Bergen as Grandpa Walton (no Charlie McCarthy in sight) and the fact I found myself relating to John-Boy, played by a former child star I'd never heard of, Richard Thomas, it became a favorite. I followed it into series when THE WALTONS began its long run. In 2008, Richard Thomas came through my store at the Airport...but on my day off! Ugh!

Poor Lena, again. I hadn't thought about her in years until I re-read this journal. Eventually she died from an eating disorder.

The YOUNG FRANKENSTEIN book was a novelization that actually came across as more R-rated than the PG rated film.

The CLINT EASTWOOD bio was by film professor Stuart Kaminsky. In the late seventies, he switched to writing Hollywood themed mysteries set in the 1930's and became my favorite mystery writer. He passed just a couple of years back and in 2012 I sold that CLINT EASTWOOD book. 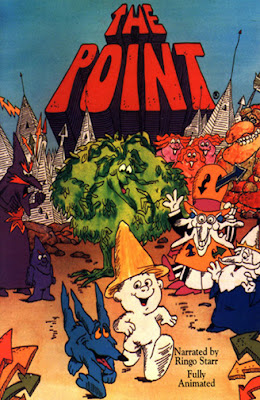 It rained most of the day.

Watched part of a Santa Claus Parade on TV, then we went uptown to Dr. Flagg's. He said my eyes had changed greatly and I needed a whole new pair of glasses. They should be ready Thursday.

Got the new Rona mag and saw a YOUNG FRANKENSTEIN book at Bell Block. Terry bought that FF issue I missed for me.

I began work on my own private collage of my favorite actors and actresses.

Saw Harry Nilsson's THE POINT, an encore of the first ever made for TV animated Movie of the Week.

I played a lot of Christmas records.

NOTES: THE POINT was the cartoon story of Oblio, the only round-headed character in a pointed world. The great song, "Me and My Arrow" (often said to be euphemistic for IT) comes from THE POINT. The original running of the film on TV featured narration by Dustin Hoffman but later versions replaced that with Ringo Starr and, beyond that, two or three other narrators! Not certain which version this early run had.


Posted by Booksteve at 4:40 AM No comments:

My glasses' other earpiece broke today. I'll have to go get new ones tomorrow. I can't put it off this time. Spent my first day at school without glasses today, though and my eyes held up pretty well.

All my teachers were finally back today.

We'll probably get to see RED BADGE OF COURAGE--which I passed up on Tuesday night--on tape on Monday and Tuesday next week.

Speaking of TV sets in the classroom, we got locked out of our room coming back from lunch because there was a TV in there.

I found out what films will open at the new Erlanger Showcase Cinemas December 20th. Three I want to see. The only problem will be determining where they are!

Tonight at The Place, they showed a Sneak of FREEBIE & THE BEAN. I think I want to see it. Dad might go with me to catch ENTER THE DRAGON. He's about the only person I know who hasn't seen it!

Caught "Mirror, Mirror," another of my favorite TREK episodes, and also saw Shatner on PYRAMID and POLICE WOMAN.

NOTES: RED BADGE OF COURAGE turned out to be a superior TV movie version of that classic. It starred Richard Thomas (who would later come in my store at the Airport but on my day off, darn it!) and Wendell Burton (whom I would later exchange a few emails with online).

I'd been wearing glasses since I was 5 years old. I actually (purposely) lost them on the second day I had them and went through long periods of not wearing them if childhood photos are to be believed. That said they became a part of me in time. Up until this point, I always wore black and silver ones, very old-fashioned looking. The brown ones seen here were my first major change ever and would last until I got wire frames n the eighties. 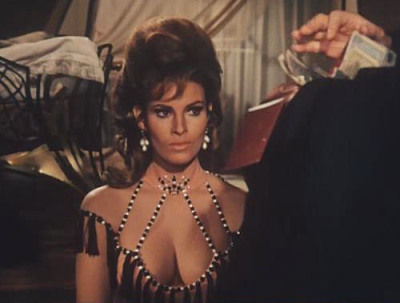 A day that started and ended badly but had a good in-between.That was today. Fooling with my zipper on my coat I missed my bus. Trying to catch up to it, I chased it all the way to 6th and Madison where I finally just decided to wait on the late bus. Fortunately it was early today and that's where the good came in.

In Gym, we actually didn't even have Gym! The Fieldhouse floor was being worked on and we ended up just watching the Senior classes play Hockey.  It was fun. Well...at least it was better than Gym. Our Coach may be evil but that fat guy was worse. I wouldn't trade ours.

Just missed the earliest bus back but I went straight over the river and got three new mags. Passed up two I didn't need and somehow ended up with two TV GUIDES. I also saw a new kids mag with an article on Daredevil but I didn't buy it.

ENTER THE DRAGON is coming back, doubled with BLACK BELT JONES. Once more would be my sixth and a half viewing.

Raquel's THE OLDEST PROFESSION is back at drive-ins. Wouldn't mind seeing that.

Got to work late because we thought they were still there but they weren't They had just left the lights on. While I worked I picked up the audio from channel 12 on the radio and listened to just the audio of Astaire and Rooney in SANTA CLAUS IS COMING TO TOWN.

Nothing else much on TV tonight.

NOTES: THE OLDEST PROFESSION was probably the single most obscure film Raquel Welch, THE sex symbol of the late sixties/early seventies, ever made. It's an international anthology of six short comical films about prostitution made in 1967. Among the actresses were Elsa Martinelli and Jeanne Moreau. Among the directors were Godard and Truffaut. As Raquel became more famous, it kept turning up on drive-in bills but we were too young to get to the drive-ins. So today it remains obscure. I never did see the film! (I actually have a source for it. I just don't really care anymore.)
Posted by Booksteve at 12:30 AM No comments: 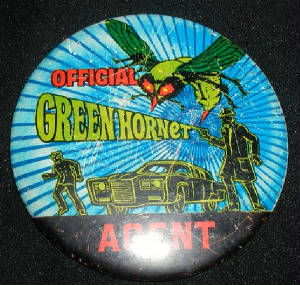 A bit better day at school but still no Home Room/English teacher.

Doug was out today, too, so Jay was my partner in identifying rocks in Science.

I began writing a story combining DM and Nightmare.

I got a Jack Davis poster at work.

I watched the return episode of Tony Orlando and Dawn as well as Jim Backus and Charo on MERV. Later on PBS, I saw Douglas Fairbanks, Sr in THE AMERICANO.

Terry called. He's gone really GREEN HORNET crazy! He wanted so badly to know who played in THE GREEN HORNET that he called Mary Wood at the Post to find out. He says he might buy my GREEN HORNET pinback button. I'll try to find it tomorrow.

The only movie that changed out this week was HARRY AND TONTO.

NOTES: Can't recall the Jack Davis poster. If I got it at work, it was probably Social Security-related.

Don't think I have any traces of that Nightmare/DM story left.

This MAY have been the first time I ever saw Doug Fairbanks in a movie. Certainly one of the earliest.

As far as that GREEN HORNET pinback button, I guess I couldn't find it then because I still have it now. Say, I wonder if Terry would still be interested? "I'll try to find it tomorrow." 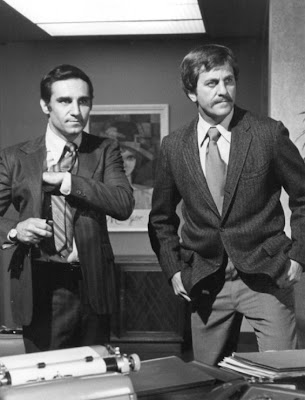 A bad day. Two teachers were absent. I really did badly in Gym as we played "21" (??) and some kind of basketball race. I got accidentally hit hard in the chest and later on at home I found it hard to swallow.  My stomach and chest hurt the rest of the night. Boy!

On the bus home that freak Dorman set off a firecracker. He makes me sick.

Doug says his ex-girlfriend had her baby.

Mom says they raided 313 the other night and found lots of dope. We had kinda figured that kinda thing was going on over there. We were right I guess.

I finally saw an actual Spidey story on THE ELECTRIC COMPANY. It was real short, neat and funny. M*A*S*H was especially good tonight, too. Also a good episode of POLICE STORY with Dandy Don.

NOTES: Dorman (not his real name) was an annoying friend of a friend in our class. A few years ago I was looking up people out of the Yearbook and found him as a registered sex offender. Can't say I was surprised.

We used to know our neighbors but there had been a big turnover and the house literally ten feet away across the alley had gone visibly downhill in the years prior to this point. Somewhere in there it was actually condemned. Oddly enough, in 2012, it's still there, presumably rehabbed and attracting a better class of people.

"Dandy Don" was Don Meredith, a football player turned actor who became a sort of regular on the anthology series, POLICE STORY, usually teamed with Tony Lo Bianco.
Posted by Booksteve at 12:30 AM No comments: 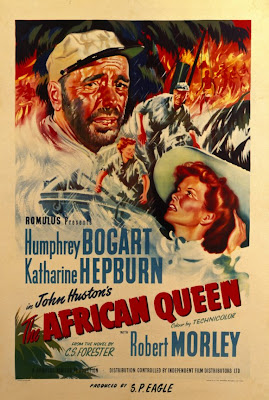 Back to school again. Only about three weeks more 'til another vacation already, though. A very unexpected heavy snowfall this morning. Things were a little slippery but not too bad really. Even Mr. K had to ride the bus, though!

I ended up getting a hundred on the notebook I waited so long to do.

One guy in my Geometry class had a mixed up book!

Sait, in my Spanish class, saw AIRPORT '75 over the weekend.

Saw "Amok Time" on STAR TREK tonight and later Bogie and Hepburn in THE AFRICAN QUEEN. And what a film that was! WOW!

NOTES: Just a reminder that they never seemed to close our schools for snow in those days.

In 2012, I was talking with Sait online today. Will have to tell him this was when he saw that movie.

Bogart was fast becoming my favorite classic era actor and AFRICAN QUEEN was a major atypical role in which he really showed his acting chops! Still a favorite!
Posted by Booksteve at 12:30 AM No comments: