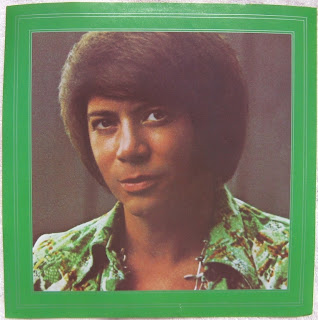 In most ways a really good day for a chane. A real holiday feeling in the air!

I got three new movie ads.

Worked on my Geometry notebook for school.

We went up and got chicken. I stopped for an album on the way back but ended up not getting one.

Saw Bill Cosby, Helen Reddy and Johnny Ray on FEELIN' GOOD. It was fun! I also took time out to watch THE SAINT and wash my hair.

When we took out the garbage tonight, it was rainy and cold. It's supposed to get colder.

In this morning's paper, I found out opening dates for a lot of the new flicks I want to see.

Saw a good episode of McCLOUD and a great magic act on MERV. Plus Paul Williams on BOBBY GOLDSBORO's show.

NOTES: Yes, I still have that PEANUTS folder although I'm thinking of putting it up for sale.

Bobby Goldsboro was a pleasant enough performer--a John Denver type--who had achieved great success with uber-schmaltzy story songs like HONEY and WATCHING SCOTTY GROW. His career suffered greatly when his wife and oldest daughter leveled unsubstantiated molestation claims at him during a messy divorce.

According to IMDB. FEELIN' GOOD, a show I don't remember at all, starred Dick Cavett and featured, of all people, Ethel Shutta--Jack Benny's partner in early radio--and actor Joe Morton, most recently on EUREKA! IMDB describes it thusly---A lunchonette called Mac's Place. Through the health problems and behavior of its residents, and through songs, sketches and animation, and documentary segments, tips on staying healthy are presented. 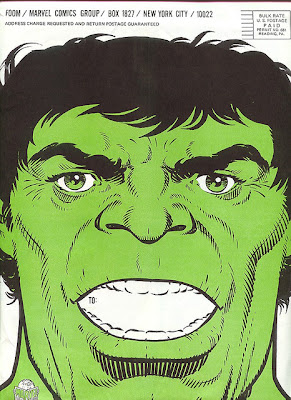 A good day, basically. Dad took me to King Kwik this morning and I paid $3.75 for 5 new PEANUTS books! I gave all my change to a Covington Lion.

It turned out I already had one of the books so I took it, along with quite a few other things, with me this afternoon out to Comic Corner. Got fifteen bucks for all of them. Terry's mother drove us so there was no way I could stop to see Debbie. While we were out there, I bought an almost complete FOOM kit! We talked to Steve about the convention coming in January and he said he's sponsoring a smaller one in March, himself, at a Holiday Inn. He also had two pix of Leonard Nimoy on the wall out there. Actual photos! Real Polaroid type pix of him at a con somewhere with sunglasses and curly hair. Definitely no Spock there! I think seeing them was the highlight of my day!

Later over the river, I passed up APES trading cards and an Eastwood bio in favor of ARGOSY with lots of good stuff!

I found out that the corner grocery sells TV GUIDE now.

I got a card from SIXTEEN saying they'll look into my missing order. About time!

NOTES: FOOM stood for Friends Of Ol' Marvel, Marvel Comics' latest attempt at a fan club, this one with the major participation of Jim Steranko. I had never actually joined but the fan club kit came with all the membership cards, magazines, posters, etc, as if I had.
Posted by Booksteve at 12:30 AM No comments: 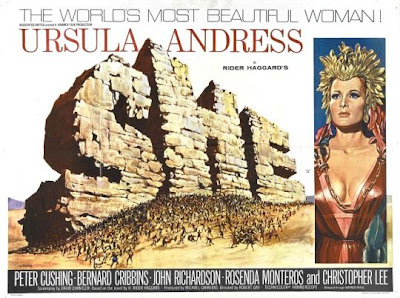 I had a lot of luck today--most of it bad. Our school pictures were out today but I didn't get mine. If you had no English class, you were supposed to go to 101 Science. My teacher was absent. After school, Doug helped me find 101 Science but by then no one was there. Monday, I guess. We had lab in Spanish again and the school paper came out. Doug and I and Jay worked on a map of the school grounds. It's pretty good but we're still working on it.

I had to catch the Eastern bus back.

IT. What'd you expect on a bad luck day?

Couldn't get up the nerve to try calling Debbie again even though the very feeling in the air earlier reminded me of her. Maybe I should find her house and stop out there tomorrow if I take the bus out to Comic Corner.

I finally heard the name of Linda's new TV movie. It's SARAH T, PORTRAIT OF A TEENAGE ALCOHOLIC.

I watched SHE, the first Hammer flick I've seen since I got the book about them.

NOTES: I cringe every time I see me trying to drag this thing with Debbie out! I'm convinced now that if she remembered me at all it was as that guy who needed a restraining order against him! Ugh! Sorry, Debbie, wherever you are!

A lot of film fans love SHE. I was not a big fan of SHE, then or now. Great cast, though. Great poster, also.
Posted by Booksteve at 12:30 AM No comments: 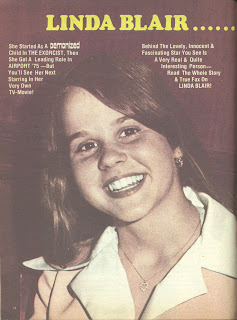 I had forgotten that I had to stay with Mom after work tonight but I managed to convince her to let me come home early. First thing I did was call Debbie again. THE LINE WAS BUSY! I'm beginning to think destiny doesn't want us to get together again. Couldn't try anymore tonight because Mom came back.

At school we heard the 3rd and last part of DEATH OF A SALESMAN.

We played basketball in Gym again and went to Lab in Spanish.

I got a 96 on the Spanish test we had yesterday.

I found a strange counting device and sunglasses at work.

After I'd been home for a while I went over the river. It was very cold and the feeling of Christmas permeated the air! I got a DC Christmas special book, TV GUIDE, APES and the new 16 with part two of Linda's life story. Saw a poster at Kidd's for the Comic Con. It says it will cost $1.25 to get in. I also saw the poster for MAN WITH THE GOLDEN GUN at the Times.

NOTES: Not much to say on this except that I have no idea what that strange counting device was. 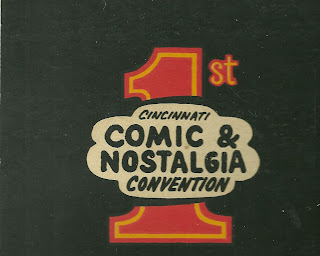 1974's been really something so far but 1975 may even top it. As of today I'm fairly certain that there WILL be a Comicon at the Netherland Hilton in January in Cincinnati. It's been planned for years but never came about. Now this is it! THE big deal of comics in my life!My biggest association with them. When I get older, I hope to go to several conventions a year but I've yet to go to even one. But my chance is coming...and I'll GRAB it! Wow!

We saw a really neat play at school this morning.

Tonight I finally got up enough nerve for the first time in over a year to call Debbie. I was really nervous but I dialed the number in the phone book labelled "children's residence." But I got a recording. I didn't know what to say to a recording. It would have been bad enough if she had actually answered! So I hung up and called Terry instead. Maybe I'll try again tomorrow.

No movies I want to see this weekend.

Saw the Osmonds TV special with Marie only she wasn't on it much. Hard to believe but Rod Hull was listed as Creative Consultant.

NOTES: This seems to be the most excited I've been all year. Yes, the convention happened. I was so nervous and shy, though, that I wandered around for about half an hour, spent the $75.00 I'd saved up for it and then scurried home. I did get a free copy of the poster for the show while I was there and earlier this year, 2012, I sold it to the man who runs the current Cincinnati Comic Expo, the single best convention we've had in this area in the nearly 4 decades since!

Rod Hull was a comedian who didn't do much other than carry around an emu puppet. The emu puppet, on the other hand, did lots! Google Rod for some odd entertainment.
Posted by Booksteve at 12:30 AM No comments: 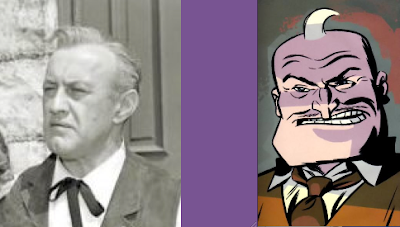 I got up very early to catch THE DICK VAN DYKE SHOW on Channel 5.

Mark Bailey childishly put chalk on my sleeve and then magic marker on my hand. I grabbed him like I was going to throttle him but I didn't really do anything. Not really sure why except I knew it wouldn't have been the right thing to do. I did smear some ink on his face and he ripped my shirt a little. I hope that's the last I hear of it! Boy!

In English we heard a recording of Lee J. Cobb (who was in THE EXORCIST) in part of DEATH OF A SALESMAN.

A slight rain this evening made it seem momentarily like yesterday.

In most of my private moments today I was thinking about getting up the nerve to call Debbie.

Caught a brief glimpse of Spidey on THE ELECTRIC COMPANY. Later I watched part of IT COULDN'T HAPPEN TO A NICER GUY but it wasn't very good so I switched. Saw Chris Connelly on POLICE STORY but he seemed to lose his magic without a mustache.  So I went to bed. What a weird day.

NOTES: If I remember correctly, Mark Bailey (not his real name) was the grandson of one of my Junior High teachers. He was bullied by bigger kids but then he turned around and took it out on smaller kids. At this time, we were about the same size and I was nearly ready to tear him apart. But my conscience prevailed.

I had first seen actor Lee Cobb as the boss of James Coburn's super secret agent in the Derek Flint films. I always thought he was a dead ringer for Will Eisner's Commissioner Dolan in THE SPIRIT.

THE ELECTRIC COMPANY was the literacy-based sister show to PBS's SESAME STREET, done for slightly older kids and featuring raucous comedy and regular appearances by Spider-Man. Spidey and The Electric Company even git their own spin-off comic book that ran for several years!

IT COULDN'T HAPPEN TO A NICER GUY was an uncomfortable TV movie "comedy"about a man claiming to have been raped by a woman. Even then, I couldn't find any humor in that. I did, however, like the lead actor, Paul Sorvino. This was the first thing I'd ever seen him in and I've enjoyed him in just about everything I've seen him in since, most recently Terence Hill's DOC WEST movies.

I heard a lot of people talking about TRIAL OF BILLY JACK at school today.

TBG arrived with some good news and some disturbing news. Ever shall it be thus.

I heard the CBS radio show for the first time in a while tonight and it was great!

NOTES: According to the online records, that evening's episode of CBS RADIO MYSTERY THEATER was entitled "The Strange Voyage of the Lady Dee" and featured actress Corrine Orr in the cast. Ms. Orr had been the voice of Marine Boy on that character's show back when I was 5 years old and later was both Trixie and Spriedel on SPEED RACER. Around 2006, I had a lovely long conversation with her on the telephone. The me from 1974 would never have believed that!
Posted by Booksteve at 12:30 AM No comments: