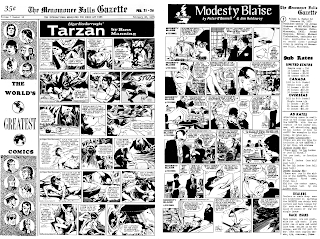 The snow is still all over the ground. I read a lot of my GAZETTES today.

NOTES: Oddly enough, in 2012, we have had no snow at all. Today, we had a couple of instances of hail, though!


I really loved THE MENOMONEE FALLS GAZETTE. Yesterday, in 2012, I was speaking with its editor on Facebook! What a world.
Posted by Booksteve at 12:13 AM No comments:

I finally wrote my pen-pal letter and finished a composition for English.

I watched Steffie and Rocky in movies on TV today.

Mom cut my hair this afternoon and tonight we had the biggest snow we've had all year.

NOTES: "Steffie" and "Rocky" were my pet names for actresses Stefanie Powers and Raquel Welch.


My mom cutting my hair is not something that happened all the time. In fact, I had been raised going to one barber, a Clifton Webb type, and when he died suddenly, I felt lost. I tried going to my Dad's barber, an Ed Wynn type. He nicked my ear. During this period, we were trying other things. Mom had bought this kit that supposedly made it easy to cut other people's hair. It wasn't. She hated it and I hated the results.
Posted by Booksteve at 12:16 AM 2 comments: 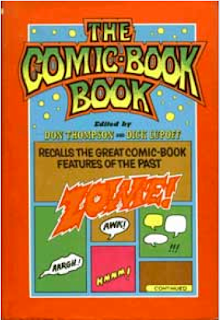 I got some more issues of THE GAZETTE as well as a few other things. THE COMIC BOOK BOOK is finally out, also! I need to start saving up $9.95 to get that on!

NOTES: THE COMIC BOOK BOOK was the long-awaited sequel to the already classic personalized history of comics entitled ALL IN COLOR FOR A DIME. That book was a collection of essays by many different writers from an early sixties sci-fi fanzine. This one featured more of the same but purposely written for this volume.


Edited by Dick Lupoff and Don Thompson, as had been the original volume, this one includes pieces by them as well as Don Glut, Mike Barrier, Maggie Thompson and Ron Goulart. In the years since, I met Don, had a story I myself wrote appear in a book alongside one by Dick, I'm Facebook friends with Maggie (and her daughter, Valerie) as well as Mr. Goulart and have exchanged email correspondence with Messrs. Glut and Barrier. I love teh Interwebs.
Posted by Booksteve at 12:14 AM No comments: 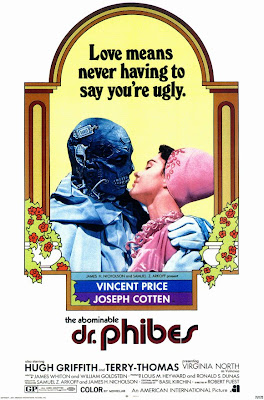 I did IT again.

I had my health exam in school today and it turned out there was nothing to it really.

NOTES: THE ABOMNABLE DR. PHIBES was a slightly campy 1971 horror film that proved a surprise hit for Vincent Price in one of his few times in heavy make-up. Initially publicized as Price's 100th movie appearance (it was not) and marketed oddly as a children's film (Vincent appeared on an episode of a kids' program selling it--WONDERAMA maybe?), it was a violent tale of multiple acts of revenge. It even led to a sequel and a long talked about but never made third film!


After a decade in Poe adaptations, this movie had revived Vincent's career as a box-office success and led to the similar, but even darker, THEATRE OF BLOOD, where one of Price's co-stars was Coral Browne, who would become his last wife.
Posted by Booksteve at 12:08 AM No comments: 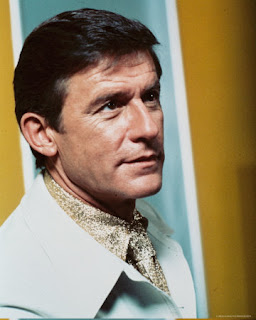 Today was a fine day at school. I even beat someone in floor drill runs in Gym.

But then I came home and found when Dad came in that now his entire--just refurnished!--car has been stolen! AS I said before when it was broken into, it really isn't any worry of mine and yet I'm concerned. I hate to see Dad this way. I wish something would happen in the case.

Probably have my health exam tomoroow. I hope so so I can get it over with.

NOTES: Ugh! I guess that's why, to this day, even though we have a driveway for our car I still look out the front door regularly just to make sure it's still there! I hate that feeling of violation when someone gets away with something that's yours--especially something that big and expensive! But...you survive.


Roddy was, of course, Roddy McDowall, a favorite then and a favorite now. Made a point of catching him on something just yesterday in 2012 in fact. In 1974, he seemed to be on everything, often still playing early twentysomething characters in spite of the fact that he was, by then, early fortysomething.
Posted by Booksteve at 12:38 AM No comments: 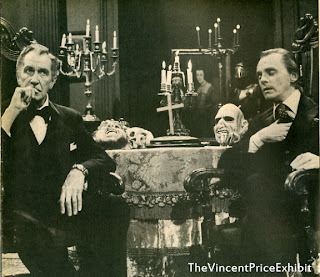 School was a disaster today but in the end I guess nothing happened that won't be forgotten by tomorrow.

I read where Bobby Sherman has a new baby--another son.

I got TBG, another pen-pal letter and I stayed up way late tonight to watch THE HORROR FILM HALL OF FAME. I may have lost some sleep but it was worth it!

NOTES: I was a very loyal fan. I was still following Bobby Sherman's career even though it was quickly dwindling at this point.


Produced by Chuck Braverman, the late night TV special HORROR HALL OF FAME was hosted by Vincent Price and featured guests such as John Carradine, FAMOUS MONSTERS editor Forrest J. Ackerman and, oddly, both actors who played the Riddler on TV's BATMAN, Frank Gorshin and John Astin.
Posted by Booksteve at 12:27 AM No comments: 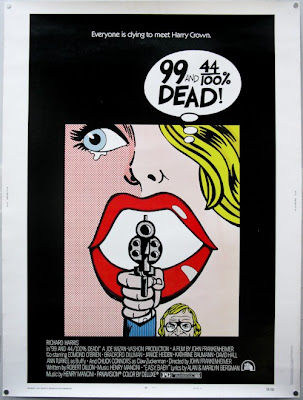 Part three of my list of movies seen in theaters in 1974. Here are the next ten.


21-99 & 44/100% DEAD-July 21st, Newport
Richard Harris and his female co-star Ann Turkel were all over the talk shows promoting this stylish and somewhat campy crime thriller about a hit man in a gang war. The two actually married in real-life. I remember enjoying it at the time but at this point, all I recall is Harris's stupid hairstyle.


22-M*A*S*H-July 21st, Newport
This was actually double-featured with the above. I'd seen it before and it has long been a favorite film. By this point, the TV series version was popular so it kept getting re-released.


23-BUTCH CASSIDY & THE SUNDANCE KID-July 23rd, Newport
This was another re-release of a favorite film that I caught just a couple days after the above double-feature. The classic western comedy drama teaming Newman and Redford, re-release in the wake of THE STING. 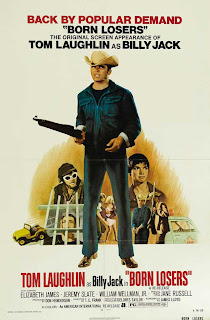 A great car chase exploitation flick with Peter Fonda, Susan George and Vic Morrow. Again at Newport. They were having the best stuff for a while that summer.


25-THE THREE MUSKETEERS-July 31st, Newport
Richard Lester's now-classic version of Dumas' famous story and one of my favorite seventies movies.


26-BORN LOSERS-August 8th, Newport
Terry and I were big into BILLY JACK since that film's successful re-release so I was anxious to catch this low-budget biker film that introduced the character as played by Tom Laughlin. Jane Russell--of all people--co-starred! Love or hate the main BJ trilogy, this one is a whole different animal. 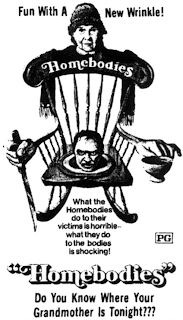 In my Top Five list of the funniest comedies ever made to this day, this politically incorrect comic western leaves nary a moment to catch one's breath.


28-HOMEBODIES-August 18th, Skywalk
This was the world premiere engagement of a low-budget horror film about homicidal senior citizens. It starred Ruth McDevitt and Paula Trueman and had been shot partly in the Cincinnati area. It was just okay. 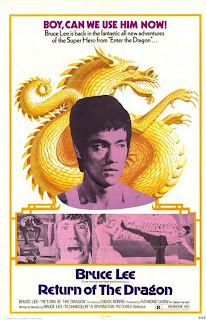 This was the highly touted big-screen re-release of the 1930 Marx Brothers comedy. Being a lifelong Groucho fan who hadn't even realized he had brothers until not long before this, I was first in line to catch it's sold out presentation!

Bruce Lee had been dead over a year before this film--one he had never intended to be released in the US--finally came out. Apparently finished just before ENTER THE DRAGON, this was called WAY OF THE DRAGON in most of the world. It is not in any way related to Lee's huge Warner Brothers hit but was now being billed as a sequel. It isn't very good overall but its memorable set-piece is Bruce Lee's one on one fight with Chuck Norris in the Roman Colosseum. It being Bruce's movie, he wins.


Posted by Booksteve at 7:40 PM No comments: 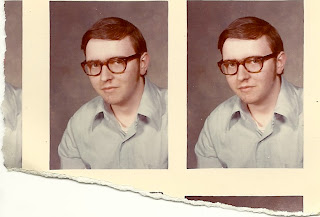 Dreary weather today. Makes me miss my memories and hope more and more that something big happens soon.

I've got to write my pen-pal letter soon and I really want to stay up late tomorrow night.

The first day back at school was okay but I'm happy to report that another school year will soon be over.

NOTES: I hit the early stages of puberty by 1969 but I hadn't had a problem with acne. I watched other classmates break out, some horribly so, but not me. And then all of sudden around this time--probably a year or so earlier--my turn came. It got pretty bad and it was definitely a factor in my decreased self-esteem. I tried creams and lotions and showering constantly and soaps and eventually even doctor-supervised meds and radiation treatments (glorified tanning beds). Finally, in my early twenties...it just faded away...mostly.
Posted by Booksteve at 12:38 AM No comments: