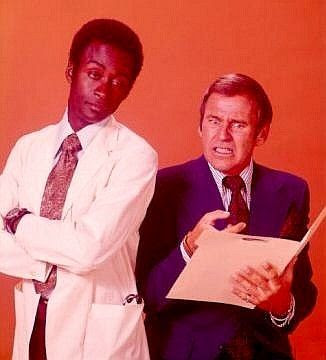 Terry decided to give me only some of the comics he owes me. I think I've talked him into giving me the rest but won't know until tomorrow. BOY!

Still been kissing the Linda poster and now the SEVENTEEN cover, too! So beautiful.

We were late getting to work because some of those dumbSocial Security people stayed until 8:15! I didn't get back 'til after 9:30. That was okay, though, since there wasn't anything good on until 10.

NOTES: Nick Clooney, of course, is George's dad and literally a living legend of Cincinnati television. I've been privileged to meet and get to know this handsome, humble, talented man and his equally talented and absolutely lovely wife Nina quite a number of times in the years since. Have no idea what type of show he had at that point that was pre-empting one of my favorite sitcoms.


Actually though, TEMPERATURE'S RISING was, at that point, called THE NEW TEMPERATURE'S RISING and was not the show it had been in Season 1. At the beginning of the 2nd season, they had taken a wonderful, silly sitcom spotlighting the great Cleavon Little with James Whitmore as straight man and trashed everything but the setting and Cleavon. Even then, though, they toned down his character significantly and put him opposite Paul Lynde. Now Lynde was nobody's straight man (pun intended) and even William Asher, who had used him with great success on BEWITCHED, had no clue on how to use him here.


The series had actually been taken off in January and starting this night the network was running off the final 7 unaired episodes during the summer.

I just read William Asher died the other day.

Hello~! I just happened on your blog while I was researching some stuff about Larry Flynt, and have been "awkwardly" fascinated by the amazing memorabilia~! I am class of 78, lived in Cincy til 1981, my folks lived there until they passed in the late 90's, and so you can imagine how many memories flood in. As I read Nick Clooney's name, I began to remember Al Schottelkotte, wasn't he on channel 9 then, WCPO? (Ack, my age is showing.) Anyway, thank you for this, I plan to check it all out, as time permits, and thank you so much for this blog, I am having a great time with it~! Sincerely,
Marsha Pullem Johnson
(Originally from Cincy, "The Ville", went to Walnut Hills High School and finally left my Senior Year and graduated from Withrow in 1978~!)

Here's my Al Schottelkotte story. Al was considered one of the best newsmen of his day and pioneered many now-standard modernizations in TV news. In 1982, he came in the downtown bookstore where I was working looking for a copy of the brand new WORLD ALMANAC. I was new and the only employee there at the moment. We looked, we looked and we looked some more. Finally, I walked him to the front doors and apologized. I watched him walk up the street wondering where the heck the Almanacs could be. Then I turned around. The entire front table display was made up of about 100 copies of it!! The city's top newsman and I could NOT find one book in plain sight! Sigh...