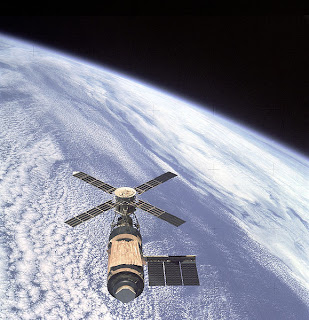 Well, that's all I needed. I did IT today in spite of my best intentions and I actually ended up better than I've felt in ages. Maybe that's it and I can finally put it behind me...for now at least.

I finally finished my rewrite today and later Terry told me some mighty interesting things about what's out in Cincinnati right now.

NOTES: A few days before this in 1974, the final astronauts of the Skylab mission returned to Earth and the space station remained empty until it crashed to Earth years later. There were later planned missions and some talk of reusing Skylab for the developing Space Shuttle but in the end, nothing came of it.


I may not have mentioned it in my Journal but I had been a space buff ever since seeing John Glenn's flight coverage at an early age. I followed the Gemini and Apollo programs and was still enthralled during the Skylab era. Sad to see it end...even though we didn't yet know it WAS the end.