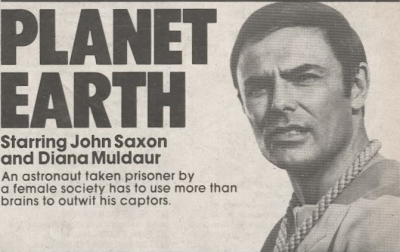 I finally went and looked at Tim's comics. I bought about six of them for a nickel apiece. I'm to sell the rest for him next weekend for $4.75 and I get to keep the 75 cents! Also, Terry owes me $1.50.

I'll probably see THE POSEIDON ADVENTURE (the first ad on the first page of my first scrapbook from a couple years back) finally this weekend at The International '70.

MAGNUM FORCE starts up at the Madison tomorrow.


I don't know why I skipped THE POSEIDON ADVENTURE when it first came out. Considered the first in the seventies disaster movie trend, it was by Irwin Allen who had made many of my favorite childhood TV series including LOST IN SPACE and THE TIME TUNNEL. It also had a genuinely all-star cast including a number of my favorite actors like Roddy McDowall and even my future real-life friend Bob Hastings.


PLANET EARTH was a semi-sequel/semi-remake of Gene Roddenberry's post-STAR TREK pilot, GENESIS II. The original starred a quirky actor named Alex Cord. This one starred the more traditional John Saxon, a favorite of mine since ENTER THE DRAGON (as well as a future Facebook friend) but I didn't think he worked as well. I watched both versions again in 2011 and I stand by that.
Posted by Booksteve at 9:40 PM

And wasn't Diana Muldaur in at least one Star Trek episode?

Diana Muldaur was not only in one STAR TREK episode, she went on to co-star in the 2nd season of ST-TNG in the eighties. In fact, she was in pretty much everything during the late sixties and all through the seventies! During this same period here, she was Sam's girlfriend on McCLOUD in a semi-regular role, also.

Can't believe I forgot AIRPORT.Thanks for the reminder. I actually love that movie! More a soap opera with a disaster though.

Diana Muldaur was one of only a very few who appeared in two separate STAR TREK episodes as different major characters:

She has always been a favorite of mine. I thought she added much more to STAR TREK:TNG than Gates Mcfadden's Dr. Crusher. She was the only character with the backbone to stand up to Picard when he was wrong.

I love all those films - Genesis II, Planet Earth, Strange New World. One of these days I am going to buy the dvds. I think the price just went down somewhat on Amazon.

Yes, you're right, Steve -- "Airport" was more soap opera than anything else!

I don't know the Star Trek TNG series as well as the originals, so I didn't realize Diana was in that too. I'll have to catch up with those someday!