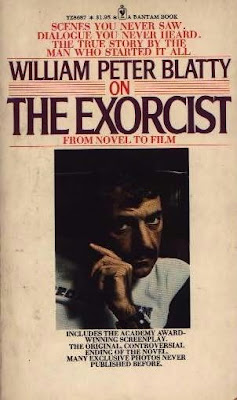 I had to give up several mags to get a copy of WILLIAM PETER BLATTY ON THE EXORCIST. For $1.95, I got the complete screenplay of the film , inside stories and pages and pages of pictures! Some of Linda I never expected to see and lots of behind the scenes shots. It was worth the price!

I also got all the new comics and the new SPECTACULAR SPIDER-MAN TREASURY EDITION for a buck fifty!

Dad stayed home sick today. I felt better today myself after yesterday's unexpected workout. Terry maintains he's doing it again on Saturday. Not with me!

NOTES: EXORCIST screenwriter William Peter Blatty had been in Hollywood a long time and knew his way around a screenplay but this one turned out to be a phenomenon. Assuming he wrote the book himself, he did an excellent job. There were a lot of behind-the-scenes books on particular movies in the seventies but this one remains one of the best in my opinion


I never did invest a whole day in walking to that Showcase Cinemas. Soon enough we were going to get one of our own in Northern Kentucky and it was, in its own way, just as hard to get to if you didn't have a car! What were they thinking?


We had a complete set of Funk and Wagnells' Encyclopedias, purchased one per week at the local supermarket back in 1968. We also purchased matching yearbooks for every year since which started taking up a lot of space. The idea was that I could use them for my homework. Only I rarely actually had homework! We continued getting the yearbooks until. I believe, 1982. By that point there was nowhere to actually put them except filling the top of the mantle all the way across. Around that time, I canceled the Yearbook and we boxed them all up, to be donated to...somewhere...a dozen years on.
Posted by Booksteve at 1:00 AM

I recall getting Funk and Wagnells' Encyclopedias at the grocery store.

We use to call them something else though.

I guess the internet killed the encyclopedia star.

If it's the Spectacular Spider-man Treasury I'm thinking of, it's the red cover with the classic Romita swipe of the classic Ditko Spider-man pose -- crouched on one knee, arm out, open-palmed in Romita's, clenched-fist in Ditko's. I wanted that treasury and went so far as to fill out a comic coupon to order it only to discover the coupon was for a beach towel with the cover on it. I did manage to pick it up on eBay a few years ago and was disappointed to discover that it was (of course) a collection of reprinted material from the comic.

I had it when it first came out! Bought it at Woolworth. Had to buy a copy of it again on eBay a couple years back when I was writing a piece on LIVE & LET DIE for a Yaphet Kotto Blogathon. It really is a fun book and it sure reads like Moore actually wrote it himself!

I have read it twice so far!! It does read as if Roger Moore penned the book!!

I recently found and purchased another copy of the" Live And Let Die " book !! I also found a copy of the" Behind The Scenes Of The Movie JAWS " at the same used Bookstore!! I have not read it just yet however.