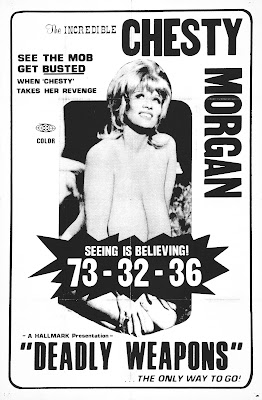 I saw a couple of EXORCIST stars on with MIKE DOUGLAS but not Linda, sad to say. I don't believe in the devil. I believe that men's own minds hold the keys for all "devil"-attributed phenomena.

Got kind of crazy and did IT differently today but now I'm over that weird feeling I've had for the past few days.

There are several good movies starting this week. Some I've done seen (MAGNUM FORCE) and some I most likely won't see (CHESTY MORGAN'S DEADLY WEAPONS) and then there's THE GOLDEN VOYAGE OF SINBAD. It's out at the Showcase Cinemas but if Terry will come with me, I'll go. It's rated G and I remember the bus number form when me and Dad tried to go out there to see THE EXORCIST. I really hope we go. Terry says his Mom might take us to see THE EXORCIST which means there's a better chance that Dad will take us to THUNDERBOLT & LIGHTFOOT. I saw both advertised on TV tonight!

The guy was here today working on the furnace and I had to stay home to let him into the apartment when the time came.

I read this very book today and realized just how often IT has happened. Wish I'd never discovered it!

I recorded an old SHADOW radio drama on tape.

NOTES: That last is obviously another early example of my building interest in old time radio. Last year, 2011, I worked as proofreader for Martin Grams' extensive and definitive history on THE SHADOW radio series. Today, in 2012, son David had a friend over and, without any hint for us, she told us how much she enjoyed listening to OTR when she could find it! One of us!


Don't ask about the crazy IT. I don't remember. The mind boggles though, doesn't it?


Remember a time when you didn't think twice about a 15 year old boy being left at home alone to allow a strange man in to fix the furnace?


Still have never seen DEADLY WEAPONS but I've read extensively on no-budget filmmaker Doris Wishman who made it and the painfully endowed stripper who starred in it, Chesty Morgan. Chesty actually was appearing in nearby Newport to promote the film when it opened locally and was interviewed by THE CINCINNATI POST's Mary Wood.


As far as taking the bus to the Showcase Cinemas, I believe I've touched on what happens before. Check back tomorrow for the full story.