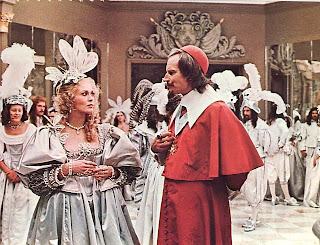 Just a month today from my birthday.

Some good, some bad, today. It snowed again. I almost didn't go to school because of my cold but really wanted to see THE RED BADGE OF COURAGE and I also had a Spanish test. Turned out BADGE isn't 'til next week and the test is tomorrow.

I did have a Geometry test and in English we had a hilarious discussion of prostitution throughout history. In actual history class, we acted out historical figures and I was assigned Cardinal Richelieu, enemy of the Musketeers, played by Charlton Heston in the film.

I missed the first bus back and had to wait in the cold for the next one.

I started reading my new paperbacks. YOUNG FRANKENSTEIN was better than TRIAL OF BILLY JACK.

NOTES: Heston, as an actor, had always made a great hero but in Richard Lester's THREE MUSKETEERS (and its later sequel), he gave a fine, nuanced performance as the real life Cardinal  Richelieu.
Posted by Booksteve at 12:30 AM