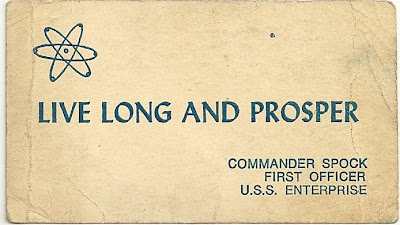 A bad beginning. Got my glasses fixed, though...somewhat.  I still don't feel like they're perfect.

Terry's mother drove us over the river and dropped us off at the bus stop. We caught bus # 17 to UC and got off when we thought we saw it. We were right. After wandering aimlessly for a while, we asked a guy how to get to Tangeman Center and he told us and we found it. Man, it's really beautiful up there. I may consider going there rather than Indiana University.

A lot of the same Trek fans were there but even more. There was a door prize but we didn't win. We all got Spock business cards. We discussed the fanzine and they want me to call them when I finish the STAR TREK story I started last year. We also discussed the trip. It would be about a hundred bucks each. With  a little work, I could afford it but I'd have to miss a few school days. That won't go over well. I think maybe Mom and dad might agree. Oh, it would be marvelous!

NOTES: I remember us being overwhelmed by how big The University of Cincinnati was! At that time, I had hoped to attend the Indiana University because I had discovered they taught a course on comic book history. I had even sent away for flyers a year or so before. Who knows if they were still teaching it by the time I would have actually needed it? If I'm correct, it was being taught by Michael Uslan who went on to not only write comics himself but also to produce the BATMAN movie franchise starting with the Michael Keaton films. As I ended up not going anywhere, the thoughts were moot and, in retrospect, a bit sad.

The STAR TREK fan stuff never really went anywhere or if it did, they quit contacting Terry and myself, perhaps deciding we were too young. Never saw a fanzine, never made the trip. Never heard from them again, sadly. But I kept the Spock business card! See above.