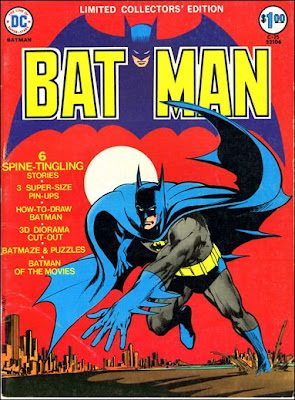 I got the big BATMAN book and some great issues of the GAZETTE.

Terry came over early and that pretty much took up my whole day, though. Oh, well.

NOTES: DC Comics had a popular series of extra-large comic books in the seventies. Some were facsimile reprints of entire classic Golden Age issues. Others were all-new, super-length specials. Overall, though, these were the seventies version of the classic Silver Age 80 Page Giants, reprinting vintage material. Seen here is the BATMAN volume that I purchased on this date in January of '74, complete with an absolutely striking Neal Adams cover.
Posted by Booksteve at 12:22 AM