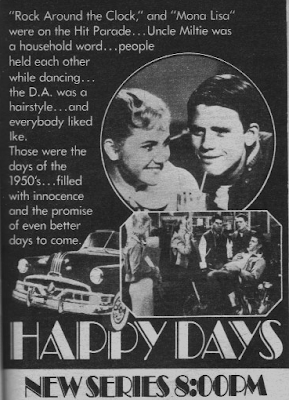 Here I am, again--the Television Freak. Except for a slightly hectic day at school and a short but profitable (possessions-wise) trip across the river later, that's all I did was watch TV.

Oh, I also did write my pen-pal letter and paid my Post bill by mail.


NOTES: Not sure why I considered it "my" Post bill. THE POST was the local evening newspaper at the time which we had always gotten. Later, we started getting THE ENQUIRER, Cincinnati's morning newspaper, pretty much exclusively so I could collect the SPIDER-MAN newspaper strip. So I can see where I would have considered THE ENQUIRER as "my" paper but THE POST? Don't know.


THE CINCINNATI POST (and its special edition, THE KENTUCKY POST) went Internet only a few years back and THE ENQUIRER has shrunken so much that I almost cry to hold a copy anymore...which I rarely do.


One of my new favorite shows on TV at that time, airing on Tuesday evenings, was HAPPY DAYS. The now-classic sitcom of fifties life starring Ron Howard and Henry Winkler had premiered on January 15th as a mid-season replacement so this was only the second episode. I'm not even sure The Fonz was IN the second episode! HAPPY DAYS, would, of course, run 11 seasons and literally define the term, "jumping the shark."
Posted by Booksteve at 12:10 AM

I watched this night's Happy Days tonight "The Lemon" Ritchie and Potsie co-buy a clunker of a car. I'm now appreciating the early year/filmed-with-canned-laughter/"Chuck"/ Fonzie-in-a-windcheater episodes more than I've before...


The other day, I watched the pilot movie of "Get Christie Love" which aired this night. I don't think blaxploitation works with with me, but I'll continue with this show's one season (I have most the eps). The appearance of Harry Guardino did remind me to finish up The New Perry Mason with "The Case of the Violent Valley" with Andy Robinson and Denver Pyle which aired the previous Sunday to this.