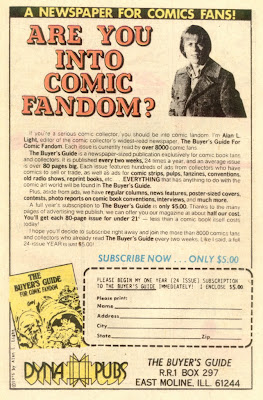 Well, the first month's over.

I had a lot of tests today at school and as usual I passed them all.

I did a good deed today helping a man get his car started.

Unfortunately I did IT again, too, darn it! DEFINITELY the last time!

Terry got his new TBG so I'm probably going to get mine tomorrow.

Probably going to try the movie again, tomorrow, too.


TBG was THE BUYER'S GUIDE TO COMIC FANDOM, a weekly newspaper for comics fans and, in those pre-Net days, the ONLY place for relatively up-to-date comics news. It was published by a man named Alan Light who, in retrospect, really wasn't much older than I was at the time. I subscribed regularly from issue 17 in 1972 until sometime in the 1990's and have picked up a number of issues of the now-magazine version, retitled CBG--THE COMICS BUYER'S GUIDE--since.
Posted by Booksteve at 12:49 AM