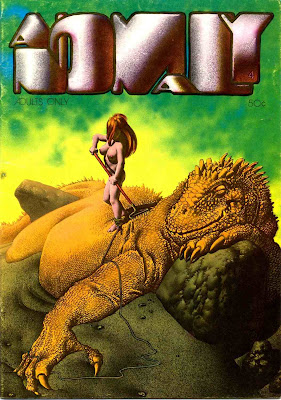 I made it to school today after all and almost everything went fine.

IT again! I went ahead and destroyed everything associated with it except for a few photos I tore out and a couple of comics. And to think, I wasn't going to do it at ALL this year. Sheesh!

NOTES: Yeah, I was willing to destroy the comparatively expensive mags but the comics--most likely undergrounds in this case--were safe. I had been buying undergrounds since I was 13 as the guys at what passed for the local "head shop" in downtown Cincinnati had decided I seemed more mature than some of their older customers! I appreciated comix for their freedoms, their politics, their unique art styles, their original thoughts and, of course, their dirty pictures! I wasn't really into Robert Crumb's, though, which is odd as Crumb was a major influence on my own style of art when I drew cityscapes and such in art class.  I loved Corben, though (seen here), along with Bode, Rand Holmes, Jay Lynch, Skip Williamson (now a Facebook friend) and later Gilbert Shelton, Fred Schrier, Larry Welz and Dave Sheridan.
Posted by Booksteve at 12:11 AM

A couple of shows I watched last week that aired this day:

-The TV Movie "The Girl Who Came Gift-Wrapped" Karen Valentine as title role. very charming and beautiful! Would've been a crush! (5 year me remembers Valentine but could only go so far with her identity).Richard Long (sad he would pass in the coming December) Tom Bosley, Farrah Fawcett. What a remarkable genre the "TV movie" was!!

Check out my BOOKSTEVE'S LIBRARY blog for a post just the other day in celebration of Karen's 73rd (!) birthday! http://booksteveslibrary.blogspot.com/2020/05/karen-valentine.html