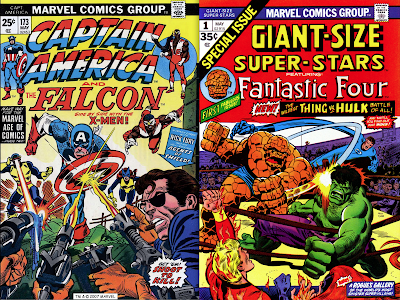 I went over to Terry's for most of the afternoon and in Cincy picked up the best NEW comics I've read in months.

NOTES: Another of those days with not much to say, I'm afraid. As comic books were always dated about two months ahead, above are two comics that most likely hit the stands this month if not this very week. Im not a big fan overall of the so-called Bronze Age f the seventies. Both DC and Marvel had some doldrums and, quite frankly, hackwork. What's good, though, was amazing and included things like Steve Englehart's now-classic CAPTAIN AMERICA run and Rich Buckler's brief stint on THE FANTASTIC FOUR.  In recent years, Rich and I have begun a friendly acquaintance via the 'Net.
Posted by Booksteve at 12:32 AM

Rich Buckler, who died a few months ago, was born on February 6th, 1949!! This means that he turned Twenty years old on the EXACT day on which I was born!! May he rest in peace!!