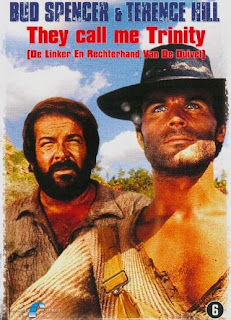 The algebra turned out okay, after all.

Speaking of movies, I'll almost definitely see one at the Ludlow this weekend as there's a new Trinity flick out there.

NOTES: So much for my predictions. I did NOT see a movie that weekend. In fact, I was getting off to a pretty slow start when one considers how many films I did ultimately see in theaters that year.


I'm surprised I didn't catch the Trinity flick, though. Technically there is only one actual sequel to THEY CALL ME TRINITY and that's TRINITY IS STILL MY NAME. That said, there are dozens of spaghetti westerns that incorporate the Trinity name--most well after the fact--to try to fool audiences and scores of pictures starring Trinity stars Terence Hill and/or Bud Spencer in Trinity-style roles. In fact, there are even Italian films starring Hill and Spencer lookalikes!


The duo never really caught on in the US but have been favorites of mine since 1972 or so. It's just been in recent years that I've been able to finally see (through the magic of the Internet) most of their fun films, together and separately. In fact, by sheer coincidence, this afternoon, I was watching one of the Hill/Spencer lookalikes comedies, this one starring Paul Smith who went on to play Bluto in Robert Altman's POPEYE movie.
Posted by Booksteve at 12:14 AM