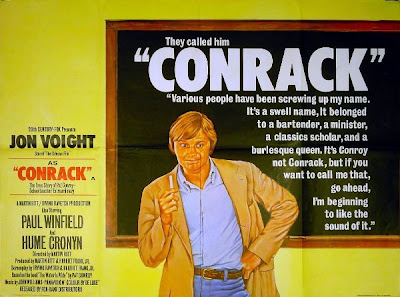 Again I have high hopes of seeing THE EXORCIST. This weekend I also may see CONRACK at the Place.

I probably can't take that big test in English so I'll just have to do a lot of extra credit work.

I'm writing a composition soon about my favorite (and least favorite) movies of recent years.

NOTES: So weird. My son came home today in 2012 upset with a B+ he had gotten in English, Says he'll just have to do a lot of extra credit work.


CONRACK was one of Jon Voight's biggest films since MIDNIGHT COWBOY made him a star five years earlier. I wouldn't end up seeing it until it hit TV a few years later, though. It was based on the autobiography of teacher Pat Conroy who would go one to become a best-selling author whose works I would be selling throughout my long bookstore career.
Posted by Booksteve at 12:17 AM

Just started bingeing "The Rockford Files"; The pilot movie "Backlash of the Hunter" aired on this date.

Currently watching Conrack now on Starz streaming! Was about to watch the Kojak that aired this date ("Mojo") but then saw your passage and noticed Conrack available, so....

10 minutes in, enjoying it!