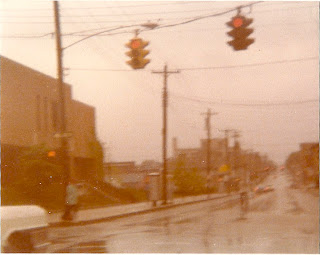 My cold was some better today. I went with Dad to get chicken and hamburgers and took some pictures, too.

Mom and Dad went to the ball game later but I stayed home.

The paper had ads for about five movies I want to see soon.

Didn't get to sleep until very late tonight because there was a big flying bug in my room. We never got it either. All we did was get it out of there.

NOTES: I think this was one of the photos I took that day. If so, then it must have quit raining before the Reds game.


Sometimes, like today apparently, we'd get a combination of Famous Recipe Fried Chicken (on the left one block ahead in this pic...and still in 2012 come to think of it--and White Castles. We only lived 4 blocks from the chicken place so we only drove if we were getting the hamburgers, too, as they 7 blocks or so further up from this shot.


I hated those flying bugs---big ol' things supposedly brought back from Florida by other tenants. I'd bounce around my bedroom from the bed to the desktop swatting at 'em with a broom and making sure everyone else in the house was awake to help! Haven't seen one in years luckily. In fact, nowadays we just get the occasional bat!

That's Scott Street from the corner of fifth; that's the Kenton Co. Library on the left.

(I lived in Covington for eight years:-))

Hey, Joe! I just checked out your stuff on DEVIANT ART. I really enjoy your art style and your strips are good, wholesome naughty fun! Good stuff!

Thanx!! That means a lot coming from the World Famous Booksteve (and neighboe...I live across the river in Cincinnati!!):-)