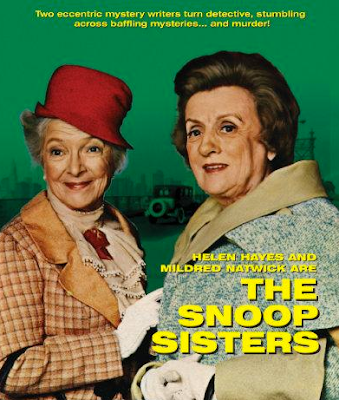 I wrote what I think is a very nice letter to Linda. I'm praying that she'll answer it. I'll probably mail it tomorrow.

THE SUPER COPS is through being read.

For once tonight there was something good on TV for a change. THE SNOOP SISTERS.

I saw Rex Reed on DONAHUE. Saw the creator of Barbie on TV, too.

The Cool Ghoul will be back for a telethon on Saturday.

A nearly perfect day was dampered but not ruined by IT.

NOTES:I sold that copy of THE SUPER COPS a long time ago but ended up getting a different copy a few years ago in a box of assorted paperbacks.


The Cool Ghoul was Cincinnati's own horror host but he'd been off the air for a couple of years by that point. He would continue to make appearances until his passing nearly three decades later!


Film critic Rex Reed was (and presumably still is) an arrogant know-it-all but I do enjoy his writing. Today in 2012, Facebook suggested I friend him as we have several mutual friends!


THE SNOOP SISTERS was a fun but short-lived mystery series in the 90 minute Mystery Movie mode. It starred Helen Hayes and Mildred Natwick as two aging, eccentric mystery writers who constantly stumble upon real mysteries. I was able to re-watch the whole series a couple of years back and it holds up very well indeed.


I'm so embarrassed by all this gushy Linda Blair stuff.

I'm sure you weren't the only teenage boy who was obsessing about Linda Blair. She's probably heard it all before!

I've never heard of "The Snoop Sisters," but I love Helen Hayes and Mildred Natwick. How did I miss that one?!

Keep in mind, I'd never even seen her in anything at this point! Only photos!

As far as the SNOOP SISTERS, the pilot's on YouTube in multiple parts. Here's Alice Cooper's famous guest appearance as the Prince of Darkness! http://www.youtube.com/watch?v=ubIQeWtmK9o

Awesome! Thanks for the link.

The only thing I've ever seen Mildred Natwick in was "The House Without a Christmas Tree" from 1972 (and the subsequent sequels).I recognized her immediately in the picture from the post. I'll have to check out The Snoop Sisters.

Watched the 1972 pilot today of The Snoop Sisters! Early Jill Clayburgh, no Convy, and Barney was the great Art Carney who stole it (although I did enjoy Lou Antonio...)!!!

..and HEY! The episode that aired this night was a repeat of the Vincent Price/Roddy McDowell episode you mentioned watching before in the Journal. HA!