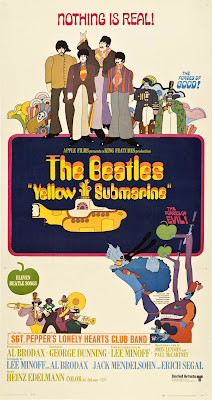 Today I spent most of my afternoon in Cincinnati and I didn't get a thing except a 95 cent meal at McDonalds. Terry was there and says there's a good chance we'll see the movie this Sunday. I've heard that before but I'm hoping. I'm praying to finally see it!

I watched YELLOW SUBMARINE for the third time on TV tonight.

NOTES: By this point, I was pretty much just wanting to get seeing that #$$#!! movie over with! It didn't even occur to me that I had read so much about it that it couldn't possibly live up to its considerable hype by the time I finally got to it.


I generally credit 1968's YELLOW SUBMARINE as being the first movie I was allowed to see without my parents. I could be wrong but it was definitely one of the first. I enjoyed it so much that I insisted my parents come see it with me a week later! This was six years later when I saw it the third time. I got the DVD a few years back and have watched that who knows how many more times since.
Posted by Booksteve at 1:00 AM

What's so great about Yellow Submarine? I know the song, have listened to the lp, but only seen excerpts of the movie. Why is it so good?