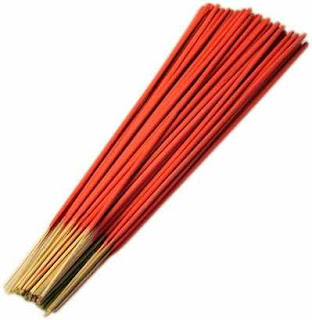 Terry called early and said we'd surely get to see THE EXORCIST tonight. All the rest of the day I was joyful. Then at 5 when he was supposed to call and tell me what time he was picking me up, he called to say something had come up. I should have known.  Says now it'll probably be tomorrow. He'd better be right. I remain hopeful.

Mom gave me some strawberry incense that Phyllis had brought me last week. She'd forgotten about it. It was the first time I'd ever burned incense. At first, I couldn't smell a thing. Finally the smell came out after several hours. I got a headache.

NOTES: Well, what do you know? I skipped ahead and saw that it WAS Terry's mother who ended up taking us. In MY memory it was my own mother! But that's tomorrow's story...finally!


Apparently Phyllis presumed that all teenagers burned incense. It was a popular thing to do in the seventies, partially to disguise the smell of less legal items,  but I had never done it. If I recall correctly, since I had no incense burner, I stuck it in a Pepsi bottle! I did get it from time to time after that although never regularly.
Posted by Booksteve at 12:30 AM

I remember on this day in 1974 I turned 13...my next door neighboe and best friend (also named Terry, oddly enough) and his brother Bill pounded on my shoulders `13 times in tandem.

My shoulders were sore for three days after that, but I think that was the best summer I ever had.

Thank you for these blogs, Steve.