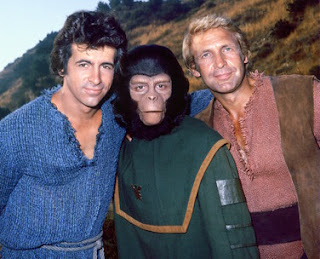 NOTES: The PLANET OF THE APES TV series really is kind of hard to fit into the established timeline of the film series but it's not a bad show. Plotwise, it's the typical "man on the run" concept only with two men and a large, sentient chimp...on the run from gorillas. Roddy was great but his makeup had been streamlined so much as to now LOOK like makeup rather than a real face. Many of the gorillas were wearing obvious masks. The constraints of TV budgets. Ron Harper, previously the star of GARRISON'S GUERILLAS, was perversely cast as the human lead with future Broadway and TV commercial voiceover star James Naughton as his sidekick. A year or so later, I would see Naughton perform in a summer stock musical.
Posted by Booksteve at 12:30 AM

And a couple years later, Ron Harper would play "Uncle Jack" in the less than stellar third season of Land of the Lost replacing Spencer Milligan who left the show over a contract dispute.

A little weird mentioning Dickenson's BBM when the first episode of Police Woman premiered on this day. ("The End Game", I'm watching it now! :) )