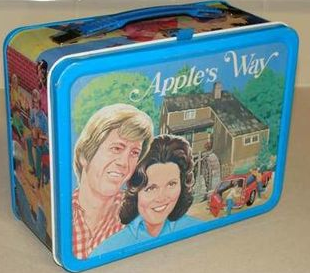 Instead of going to the movie BANK SHOT (no one would go with me) I went to Twin Fair where I got "White Rabbit" and the Donny and Marie Osmond album. Wow. IT brought back the good old days of Bobby Sherman and partridge family albums.

Almost did IT but I managed to avoid it. It's gone for good, remember?

I saw an exceptionally good episode of APPLE'S WAY.

I've got big plans for STAR TREK. More on that later.

NOTES: Not sure why I didn't see BANK SHOT alone. I actually saw the majority of the pictures that I saw by myself. Always preferred it that way as you didn't feel the need to keep another person or persons entertained.

The Donny and Marie albums really were good!

"An exceptionally good episode of APPLE'S WAY"--now there's an expression that's rarely been uttered. It wasn't bad, mind you, just unmemorable. APPLE'S WAY was an attempt at a modern day family drama with a WALTONS vibe. It starred Ronny Cox and Vince Van Patten. Starting as a mid-season replacement, it ran a season and a half. This night's episode was the first episode of the second  (and only full) season and was, according to the 'Net, entitled "Tornado."
Posted by Booksteve at 12:30 AM

>"IT brought back the good old days of Bobby >Sherman and partridge family albums."

We've all come to know what capital "IT" is in your posts. The fact that IT brought back memories of Bobby Sherman and the Partridge Family is a little disturbing. ;)

They made an Apple's Way lunch box?! Who bought that for their kid and how many times was he beat up?!

I'm pretty sure that Steve simply made a typo, making both letters in the lead word "It" capitals. The sentence makes more sense referring to the nostalgic feeling from listening to the Donny & Marie Osmond and Bobby Sherman albums. "Come on, get happy!"