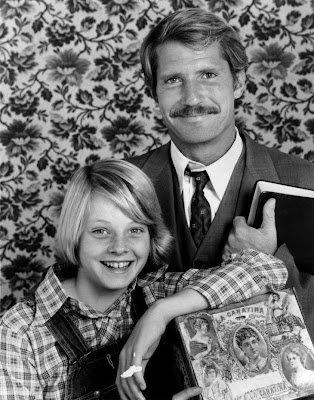 NOTES: PAPER MOON had been the movie for which Tatum O'Neal won the Oscar, beating out Linda Blair. In retrospect, Tatum was brilliant while Linda was just very good but at the time I was less than thrilled. What I was talking about here, though, was the TV version of PAPER MOON, a short-lived sitcom in which actor Chris Connelly replaced his former PEYTON PLACE brother Ryan O'Neal and future superstar Jodie Foster replaced his daughter, Tatum.
Posted by Booksteve at 12:30 AM

Wow, I was looking at that picture thinking, "Something isn't right..." It didn't even strike me that it was Jodie Foster and not Tatum O'Neal. I don't recall the tv show, but I love the movie.