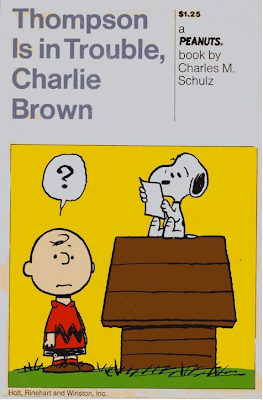 Terry came over late to go over to OBS with me. They had new Golden Age stuff. I got two cheapies and a PEANUTS paperback with the "Thompson" series. Wow! I couldn't resist.

We may go see ONE MILLION YEARS BC tomorrow at the Penthouse.

The TV man came this morning and fixed it, hopefully once and for all.

IT again...finally. Guess I knew it would happen one more time and I'm glad it did. Now I know it will never happen again! I'm free!

NOTES: We didn't make ONE MILLION YEARS BC, a revival of the 1966 Raquel Welch film that  we'd both already seen on television.

The PEANUTS book is THOMPSON IS IN TROUBLE, CHARLIE BROWN, named after a brief surreal seventies sequence in which Snoopy is called on to help fellow dog...what? Agent? Spy?...Thompson. It is, as far as I know, the only instance where a PEANUTS book had a  name like that in its title...and it was MY name! Cool! And yes, I still have it.

It was a strange story, was it not?? I recall that Thompson came to a sad end amongst the rabbits!!