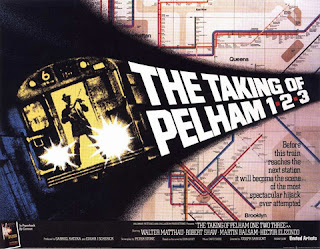 THE TAKING OF PELHAM 123 is today tied with THE STING as my two favorite seventies movies. My Dad loved it, too. One of the best endings ever.
Posted by Booksteve at 12:30 AM

I have to agree, there's something about Walter Mathau that can't be beat. Plus it had Robert Shaw and Jerry Stiller in it, as well as Mr. Grey, Martin Balsom...the last man standing.