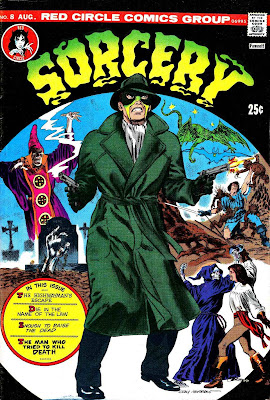 I heard a radio commercial for LAW AND DISORDER. It sounds good. Carroll O'Conner and Ernest Borgnine. Rated R.

I had two Study Halls today and another teacher absent.

Found out Doug was hurt by a falling fire extinguisher at Twin Fair yesterday.

I created "Nightmare" my own pulp character in the tradition of the Spider and the Shadow. He kinda grows on a fella.

The new Clay Wade Bailey Bridge was dedicated today and the Holmes band was present. Actually, that and some of the teachers are the only thing I like about that school.

NOTES: NOt sure what I meant by that last line as I certainly was never all that into the Holmes Band. Didn't even know anyone involved with the band. And in retrospect I DID like the school more than I seemed to at the time even if I was never really close to any of the students other than Doug whom I had known since 4th Grade.

LAW AND DISORDER is an odd little dramady movie. It's quite good but wasn't really a hit because Carroll O'Conner had become so typecast as Archie Bunker that the public wasn't ready to accept him as anything else. And the fact that this role was so close to Archie and yet NOT Archie...

Never actually did anything with Nightmare but I drew him a lot. Was actually kind of ripped off from a character Gray Morrow did in a comic book story--seen here. The comic book had come out in June. My character was similar albeit with a yellow and red mask and a yellow cape.

I have memories of watching Bad Ronald on TV sometime in the mid to late '70's. Freaked me out, the idea of someone hiding in the walls of your house watching you. I didn't know the name of the movie until I found it referenced on Kindertrauma.com about a year ago.

Have you ever read David Hofstead's book" What Were They Thinking?? 100 Dumbest Events In Television History?? " It has an entry for Bad Ronald!!

15 years of knowing this movie (I think I saw it online in a bootleg dvd catalog)! Passed through this entry during my Kojak binge just now so...