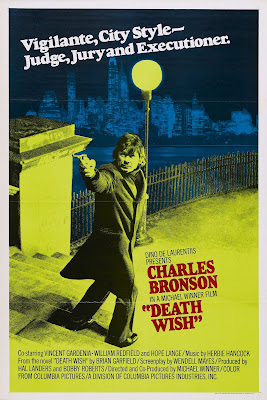 I got up early. We went to church for a change but left early because it was communion.

I decided to give in and let Terry come to the movie with us. He was glad. DEATH WISH will definitely be high on my Top Ten this year. It was great!

I found the other seat belts in the car!

Terry and I split a good pizza and I timed him as he raced around the block on his bike.

I saw good episodes of APPLE'S WAY AND McCLOUD.

Tonight I resubscribed to TBG and also wrote a letter to SPEC about my Linda Blair poster kit. Oh, boy.

NOTES: We really weren't a religious family at that point.After my Mom's death a few years later, my Dad would go more often. I think only once did I end up participating in the commuinion. I remember I thought the whole ritual was more than a little creepy.

DEATH WISH gets a bad rap. It was an A list movie with an excellent performance by Charles Bronson and a great ending but it gets judged on the basis of its four sequels, each of which was increasingly more violent and exploitative and of lessening quality (in spite of the Jimmy Page soundtrack in the second one).