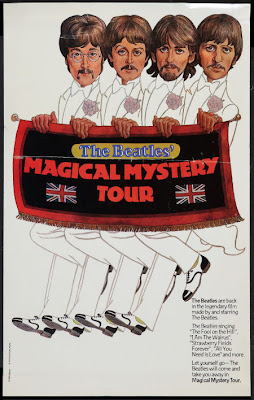 The race was called off so Terry didn't go to the movie either. But I wasn't about to miss it. I caught the bus but it broke down. By the time the replacement showed up I didn't think I was going to make it. But when I got there, there was no one there! And no one ever came, either! I was the only one. Man, The Penthouse is the smallest theater I've ever seen! No more than 20 seats and a small screen not as wide as my bed is long. I got there in time for the very beginning and left just at the very end so I wouldn't miss the bus. It was only an hour. Caught the bus right outside.

On the way home, I saw some guy I used to know about to make out with a good-lookin' chick! Wow, I wish he was me! They were really going at it behind a trash can in the alley. When I walked by, he said, "Hey, whaddayasay, Steve?" I said "nothin'" and walked on, not looking back. I'm "different," remember?

I got three Cokes from the office.

I hear part of the NatLamp radio show and hated every minute. I'll never listen to that again.

NOTES: The movie, by the way, was MAGICAL MYSTERY TOUR. Surprised I didn't mention this but my recollection is that the projectionist looked out of his booth and didn't see anyone in the tiny theater (I was in the back row) so he shut off the film! I had to go downstairs and remind them i was up there!

The NATIONAL LAMPOON radio show was a training ground for John Belushi, Gilda Radner and others who became members of the Not Ready For Prime Time Players a couple of years later. Apparently I didn't like what I heard, though.

No memory of who that guy was in the alley and I find myself wondering now if he wasn't doing something to that girl against her will considering they were hiding in an alley. Ugh. I hope not!
Posted by Booksteve at 1:15 AM

I researched and caught in your writings that Nat Lamp humor didn't appeal to you then or even now. In any case, I uploaded the episode of Radio Hour you mentioned in this post (airdate recorded as 10/5/1974) if you're up for giving it another shot... :)

I will give it a try and report back. Thanks so much!

Okay, that was unexpected. I just listened to the whole show again after nearly 44 years and I quite liked it. I not only laughed aloud in spots but I either remembered a few of the bits or else had heard them out of context over the years since. I think recognizing some of the voices helped as well. Thanks so much for this opportunity. The problem is, now I want to hear more!

(Currently binge-ing Police Story. Been following along with your blog and so far nothing on it, but I know it's to come...)