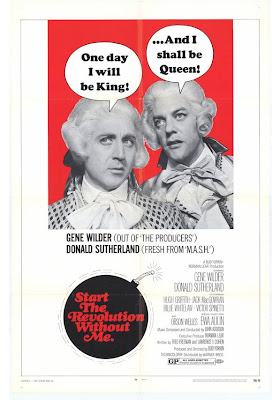 Not sure what I dreamed about last night but it sure must have been good. I awoke ready for anything. I'll bet it was about the Convention!

I worked on a new story outline for my STAR TREK piece. It only vaguely resembles what I started last year. This one is called THE GOLDEN SAVIOR. I also began rereading STAR TREK 10 and, of course, watched tonight's episode.

At school, we finally got to see Part one of RED BADGE OF COURAGE. Part two tomorrow.

Some guy came by to see Dad while he was at the doctor. Said he'd come back later but never did.

At the Office tonight, they had a tree up and a card decoration down in the break room!

Watched a little of START THE REVOLUTION WITHOUT ME on TV with Gene Wilder and Donald Sutherland.

NOTES: I don't think I ever did finish THE GOLDEN SAVIOR but I did finish the earlier TREK tale I'd started, MISSION TO MENTHOS. Still have it. These days, it's my wife who writes the STAR TREK stories as a prolific fan-fic author.

The Wilder/Sutherland film is more interesting than it is actually good but I did eventually see all of it.
Posted by Booksteve at 12:30 AM