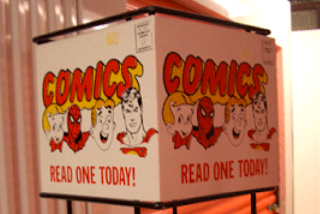 
Eventually Scroggins became the regular part of my route until I started to go into Cincinnati more often. For several years it was made even better because it was directly across the street from a junk shop that tended to get the absolute best selection of older, used comics in town...for a nickel!
Posted by Booksteve at 12:50 AM

Ah, the sight of the spinning comic rack brings back memories. I bought mine at the Rexall Drugstore. I had no source for back issues, so if I missed a month, I was out of luck. It wasn't until I was in college that a decent comic store came to town opening up access to comics of years past. Unfortunately, they were a lot more than a nickel...