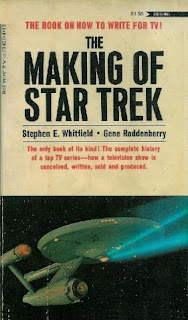 
In the early seventies, however, the series became much more popular in syndicated reruns then it had been on the network and I managed to catch all of the episodes eventually.  As stated above, my birthday present that year (presumably from my parents) was THE MAKING OF STAR TREK, a paperback edition of the 1968 book by Gene Roddenberry and Stephen Whitfield...or at least that's what I thought at the time. It came out in time that author Stephen POE had written the book with NO contributions form Roddenberry, although Roddenberry's name went on it to give it some credibility and Gene collected all the royalties from the book.  For quite some time it was the ONLY book on STAR TREK but, I believe, by this point I had already read David Gerrold's THE WORLD OF STAR TEK.
Posted by Booksteve at 12:50 AM

Wow, I'd actually never heard that about Roddenberry not contributing to THE MAKING OF STAR TREK. I read that book when I was 10, the year my mom got me into Trek. She had so many old Trek paperbacks, most of them the James Blish novelizations, but there were others including THE MAKING OF STAR TREK, THE WORLD OF STAR TREK, and David Gerrold's book about making The Trouble with Tribbles. Damn it, I wish I still had those books.

I still have that book among my many Star Trek books. It doesn't surprise me about Roddenberry. He was always looking to cash in on Trek. He wrote words to the original theme song (which were never used) so that Alexander Courage would have to split the royalties with him.

I just found and purchased this book a few months ago!! It is in such great shape after all of these years, that u hate to read the book!!

The New Perry Mason: (Monte Markham was great as Mason, but can't say the same for the new Della or Paul. The scripts def showed signs of not last past one season, but great guest stars!) "The Case of the Tortured Titan" good episode with guests Elaine Giftos (I remember her as Chrissy's friend/a professional call girl on 3's Company!) and Ron Glass (a year before Barney Miller premiered).

the big one... Columbo!!! (Cannot believe I almost passed half a century without experiencing a Columbo episode! It really is something else!) "Publish or Perish" Jack Cassidy's second stand! Mickey Spillane! Also weird how guest stars keep repeat-showing up in my binge; John Davis Chandler showed up on the last "Rookies" I saw Cassidy take on Frank Cannon on an episode last week, Mariette Hartley's fresh on my mind from a recent heart-wrenching "Streets of San Francisco"...

I also caught this night's Barnaby Jones (which I mentioned before but this episode was great!) "The Deadly Jinx" amazing performance by Meredith Baxter!

(** I did watch Bridget Loves Bernie during my 72-73 period; Def very charming, though I never did finish it...)

Raj, have I mentioned I'm enjoying your posts here almost as much as you seem to be enjoying mine? :P

I'm glad, man! The 70's seem like a time I would cherish were I older but my pre-school memories of it were vague and scattered with blind spots to many things that fascinate me about it!