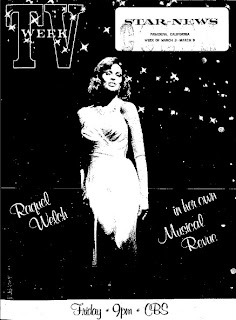 NOTES: This Raquel Welch special, produced by Sid and Marty Krofft and based in part on her nightclub act made no real impression on me as I had forgotten it even existed until now.


Raquel's previous TV special in 1970 got quite a bit of coverage including the cover of TV GUIDE. It was produced and choreographed by David Winters, a former film dancer (WEST SIDE STORY) who had also done memorably unique specials for everyone from Lucille Ball to Nancy Sinatra. Mr. Winters is now one of my Facebook friends.
Posted by Booksteve at 12:13 AM

Currently watching The 6 Million Dollar Man episode (on dvd) that aired the same night as this! ("Eyewitness to Murder")﻿ Hope you're well, Steven! :)

Overworked, underpaid, but still hanging in there. Thanks!