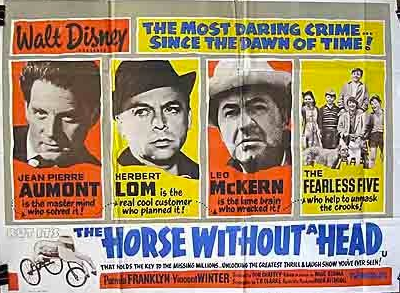 The movie they showed at school was THE HORSE WITHOUT A HEAD. A Disney film. I got out of three classes watching it and because of the short length of the film, I got out early.

Got home in time to catch a TV movie with Roddy that started at 3:30.

Got the Guides today--The TV GUIDE and THE BUYER'S GUIDE.

NOTES: Pretty much forgotten today, THE HORSE WITOUT A HEAD is one of the films the Disney studio had to produce overseas in the fifties and sixties in order to utilize money they had that for complicated reasons was only available in Europe. Many were quite good but had a very different feel than the company's live action US films. A good international cast toplined this unjustly forgotten film.
Posted by Booksteve at 12:01 AM

According to Cincinnati Enquirer TV listings: the Roddy McDowell movie was "The Cool Ones" from 1967.