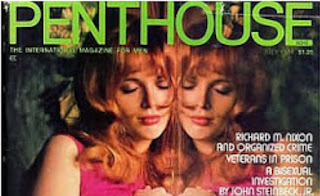 Doug came down and we finished his scrapbook. I think it turned out at least as good as mine. Mom even let him come help me at work. Tomorrow, we've talked about going to the Newport Plaza to catch 99 & 44/100 PERCENT DEAD. While he does that, I'd see BUTCH CASSIDY & THE SUNDANCE KID. Wednesday, I may go back out with either Doug or Terry to catch THE THREE MUSKETEERS or DIRTY MARY, CRAZY LARRY.

Also watched a debate between Barbie Lewandowski, the Pet of the Month in that issue of PENTHOUSE I was looking at yesterday, and some crazy guy who thinks it's his right to censor the whole world. I'm seriously thinking of writing her to say I support her views. After all, she got $2000.00 for a few pix. That's probably more than she made in a month at the teaching job they fired her from.

It's hard to believe but Doug saw THE EXORCIST yesterday! A friend asked him to go and he did. Last Saturday he wouldn't even look at pictures from it. Oh, well, he didn't like it anyway.

NOTES: Did I mention that Doug was from a very religious family? They lived in a Church! His Mom was the caretaker of the Church and their apartment was attached to the side of it in a normal looking building but there was aside door that took you inside the Church. So, yeah. His seeing THE EXORCIST was a surprise.

I tried to find out whatever happened to Barbie Lewandowski but do you realize how common a name that is? Weird!

That's Barbie's issue. Not sure if that's her on the cover.

I've always been against censorship. Discretion, yes. But not censorship. And I never understood the concept of considering a woman to be a bad person just because she poses with her clothes off. In recent years, I've actually photographed one nude model myself  (when I was trying to be a professional photographer) and I know her to be a good person all around. The toughest part was correctly lighting the naked body. MUCH tougher than when the model is clothed!

The TV debate with Lewandowski was that day's episode of Phil Donahue.