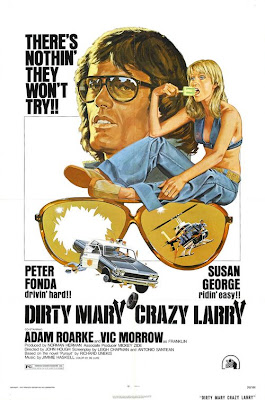 
DIRTY MARY, CRAZY LARRY is a car chase. Period. Stunts, helicopters, cars. There's a sorta-kinda plot and some B-level stars (Peter Fonda, Vic Morrow, Susan George) but it's all just an excuse for car chases. As car chase movies go--and there are a surprising amount of them--it really isn't bad. If you're expecting the least bit of anything else, you'll be disappointed.
Posted by Booksteve at 12:02 AM

Plus at the end you get a surprise.

I recall watching this at the drive-in when I was a kid.

And I just watched on the THIS movie channel not to long ago.