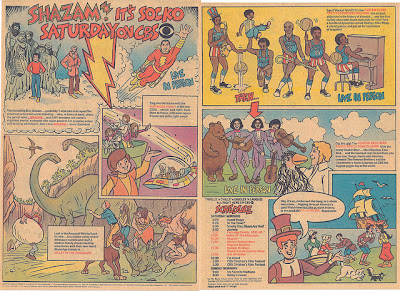 This  morning I got up early to catch the new cartoon shows. I thought HONG KONG PHOOEY was silly. The acting was good but the special effects on LAND OF THE LOST could have been a lot better. THE GLOBETROTTERS show had its moments but as a whole I thought it was boring. I was crazy about SHAZAM! The acting, effects and even story was terrific, exciting and even educational. The emphasis could have been better on the original Shazam legend. I mean, they left out the old Wizard completely! I wish I could have seen the Hudson Brothers show but it was up against the morning's best show, the returning animated STAR TREK. Words do not do this great show justice. (Sound just like a trekkie, don't I?)

Cincy had nothing again. I got another pic of Linda from TV TIME and later at the Song Shop picked up 2 Seals and Crofts doubles for only $1.87.

Tonight I saw part of the EVEL KNIEVEL movie for about the fifth time and then Evel himself on THE ANDY WILLIAMS SPECIAL. Also Donny and Marie among others. Tonight I also saw the BORN INNOCENT commercial again. I wish I could count it on my Top Ten list. Maybe I can. Can I? Maybe...we'll see.

NOTES: Yeesh! I hadn't even seen the Linda Blair TV movie yet and was ready to post it on my Top Ten for the year even though I didn't count TV movies! I had it bad.

Speaking of Linda, TV TIME was the name of the CINCINNATI POST Saturday TV mag.

I was 15 years old but never too old for good Saturday morning fare. Unfortunately, by this point in the seventies, what passed for good wasn't much. Looking at it from today's standpoint, I feel pretty much the same about HONG KONG PHOOEY although I love Scatman Crothers. LAND OF THE LOST was well-written low-rent fun with some good actors overplaying and no money for real spfx. A great opening sequence and theme song. Loved the Hudson Brothers in anything. The STAR TREK animated series was soon to be taken off locally and to this day i've never seen some of the new episodes of that second season (which was mostly reruns as it would turn out).

And apparently my opinion of SHAZAM has changed as I was just recently discussing how bad it was with a friend. The leads couldn't act, the scripts were preachy and duller than dirt, the backstory was left out and Captain Marvel was never used enough! At least the first Captain Marvel actor who debuted on this date LOOKED the role. But he was replaced in Season Two.

I remember this Saturday morning premiere as well, although I was only 6 so cut it a little more slack than you did. I remember liking Hong Kong Phooey and being crazy about Land of the Lost. Yeah, the acting was over the top and the special effects cheesy, but I didn't notice. I have the entire series on dvd and though the third season is pretty bad, the first two hold up with kids and my own enjoy watching it. And to this day, who isn't creeped out by Sleestaks?!