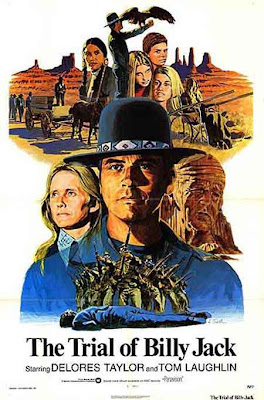 I wrote another letter to 16 Magazine as well as my pen pals letters.

Terry, myself and Dwight went to see THE TRIAL OF BILLY JACK as planned. The flick is 3 hours long! It's almost sure to be in my Top 5 this year. The film really started me thinking about how crazy some people really are.

So many politicians. Some police. The people in general! If only we could stop it but no...I'm starting to wonder if there's any hope at all for the human race.

NOTES: THE TRIAL OF BILLY JACK was the third of 4 increasingly pretentious films starring the intense Tom Laughlin (and most of his family) as a half-Indian "guardian" for a reservation school, preaching peace while using violence to fight prejudice and injustice. It was overlong, underacted and preachy but it really was the best of the films with parts being quite well done. Laughlin grew more and more eccentric over time. His next Billy Jack picture was an odd comedy-drama remake of MR. SMITH GOES TO WASHINGTON with Billy Jack in the Jimmy Stewart role. It would have its world premiere in Cincinnati! He'e been threatening to make another one ever since.
Posted by Booksteve at 12:30 AM