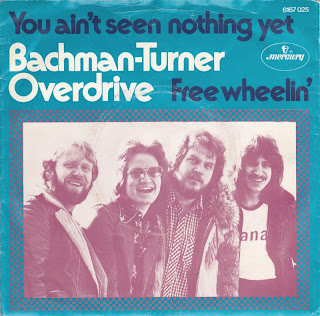 The buses are back! That didn't take long. It seemed actually as if I was dreaming when I awoke to a conversation about it.

It was very cold today and snow was actually expected. Even more snow is expected tomorrow when we get off early and I expect to see GOLD with Roger Moore.

I started writing THY SAVAGE GRAVE, the new Arkon story. I don't know. I may scrap the beginning and begin again. I like the idea, though.

Tried to avoid IT but failed. Too bad.

Some really heavy winds this evening!

NOTES: Whilst all of this was going on, the number one song in the US was Bachman-Turner Overdrive's stuttering rocker "You Ain't Seen Nothin' Yet." The group grew out of The Guess Who. I liked these guys but they weren't favorites. In recent years, former Guess Who members Randy Bachman and Burton Cummings have reunited and do this number in concert.
Posted by Booksteve at 12:30 AM